Sunday -- Gotta Get it Done Day

I wanted to putter the day away, and I managed to do a good bit of that, but I had to fit in all of the usual weekend things as well. Laundry, grocery shopping, children, you all know the routine. Girl Scouts are tomorrow so I had to reassemble the dining room. Rather than grabbing everything up and dumping it back into the study, I organized, folded, sorted, and sewed a little along the way. I downloaded a podcast of Pride and Prejudice and listed while I worked. 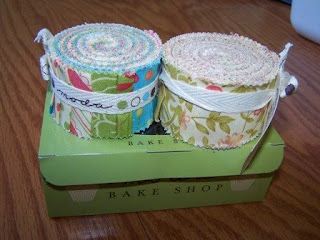 I had a moda bake shop box that I picked up while my mother-in-law was here for the cruise. I always have trouble cutting into jelly rolls and charm pack and such. They just look so cute all tied up in their ribbons that I don't want to wreck them. I think this one was called a honeybun and was made up of 1.5 inch strips. How cute is that? 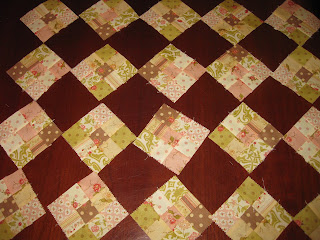 I carefully divided the strips in half and organized them into darks and lights for nine patches. I do love the way the colors all go together and blend so perfectly. I think I'll get some of the pink polkadots to go in between and turn it into an adorable little doll quilt. I don't know if I'll be able to let the girls play with this one, I may have to hang it up instead. 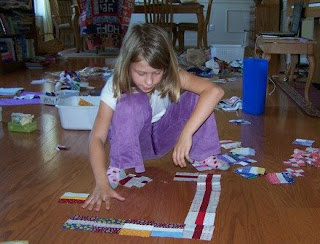 When Anna wasn't busy with play dates, she helped me with the rail fence quilts for her slumber party next weekend. She had some definite ideas about how she wanted them to look, so the patterns continue to evolve. I'll post pictures after we decide on the final designs. Each one will be a little different, but they will still be similar. She and Sydney both helped me stuff the pillows, which they thought were highly adorable. I'll make the cases after Anna picks the border colors for the quilts.
I'm having that familiar Sunday evening dread as I start to think about the work I should be getting done to be ready for school tomorrow. Finals are due on Wednesday for approval and I'm giving a test on Tuesday. I think there is a lab tomorrow, but several of my student will be gone for AP testing, so if I spread it over two days they can catch up again. I think my grading is up to date, although I need to enter some stuff into the gradebook. Just three weeks to go until I can stay up until all hours and sew and sew.
Posted by scraphappy at 9:46 PM

You got a lot done, girlfriend! I love the jelly rolls, the quilt, and the fact that Anna helped you with organizing the quilt for the slumber party. Anna has the same name as my first name, so she is a winner anyways.LOL
Loved reading the post!
Micki

Oh how I remember those hectic days of working full time, taking 3 children to school and activities, housework, shopping, etc., etc. Wears me out just thinking about it now!

I have the same problem with cutting into any of my fabrics. It's good to see you conquered your apprehension. The blocks are adorable.