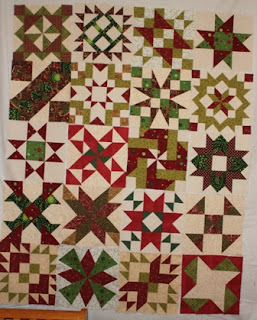 It is so hard to believe that there are only two months left in the year.  It is time to look at my "to do" list for and figure out what can be crossed off and what should be carried on to next year.  First though, is design wall Monday.  I have made 20 of Amy's Block of the months so far.  I'm not sure if I want these to live together as one quilt or if they need to be separated into the two quilts I had planned yesterday.  Hmm, I'll have to let them sit there for a while and see if they gel.  Until then, go over to Judy's blog and see what everyone else is up to.

Here is the beginning of Trick-or-treating was last night.  With Halloween falling on a school night this year, we were all out right after dinner hoping to make it around the block before it got too late.  This is the mass of kids that started the night, but soon they split into two groups.  Surprisingly the girls took the lead while the boys brought up the rear. 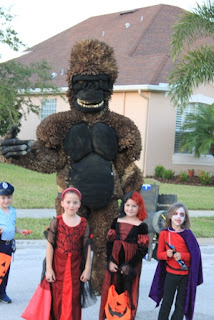 Each year our neighborhood gets a little more festive and involved.  Big foot made an appearance this year, amazing the kids with his hugeness.  We took turns sitting out in the driveway with a fireplace, making s'mores and handing out candy.  Other families sat out in lawn chairs drinking wine and handing out juice boxes.  All the festivities stopped at 8 on the nose as everyone packed up and headed to bed.
Posted by scraphappy at 4:15 PM

I know what you mean. Where did the year go?
I love the scrappyness of your quilt.

It sounds as if Hallowe'en is a real festivity for your children. Tell me, do the children dress up as anything they like, rather than something specifically 'spooky'?

Oh my! That King Kong would have frightened me if I"d openned the door to see him there. Love your quilt.

Your quilt is wonderful! And I love the big foot, surrounded by trick or treaters! What fun! :)

The colors of your quilt are so beautiful. The quilt will be wonderful.
Have a nice day and greetings from Germany
Roswitha

Love what is on your design wall...and what a fun night.