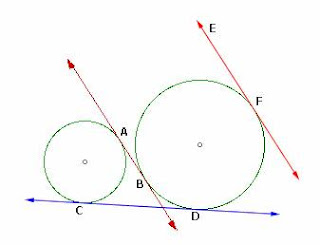 Last night Kurt was in bed by 8 (still recovery from his business trip), so after the kids were asleep I decided to catch up on ironing.  I went though most of the scrap basket and a couple of flimsies and some yardage that had come out of prewashing.  Taking advantage of daylight savings, I thought I'd use my extra hour last night instead of this morning.

My original plan for the morning was to cut up some more scraps with the GO.  I laid out all the dies and sorted everything out into stacks.  Instead of actually cutting anything though, I shot off on my first tangent of the day.

Part of the ironing last night was four quadrants of a spinning star quilt that I was making for our bed.  Kurt requested something warmer for our harsh Florida winters, so I've been looking into ordering some wool batting (it's not something they sell here).  I pulled the sections out and was auditioning sashing colors when I stumbled across the fabric that I bought for a raw edge applique quilt I wanted to try out. 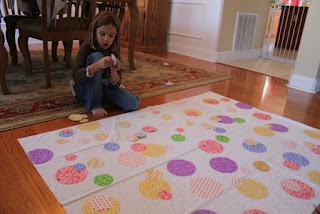 I had already cut out circles from scraps, they just needed to be placed randomly onto the background fabric.  Sounds like a perfect job for a 7 year old.  Sydney was happy to be my quilt designer and helper for the morning.  She arranged the circles to her liking and then went back with a glue stick to make sure they would stay in place until they could get sewn down. Then she chose fabric for the back and binding, all while singing Lollipop. 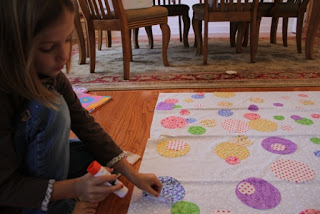 She is a pro on the handiquilter and was anxious to get to the quilting part.  It's the first time I've used it since the new carpet though, so it still needed a little set up and adjustment.  By the time the quilt was loaded and ready to go, her 7 year old attention span had been spent and I had to go find her to help with the sewing.  I've never done raw edge applique before, so I'm a little anxious about how it will turn out after the wash, but time will tell.  I did a little spiral in the circles, staying about a quarter inch from the edge and then filled in the background with swirlies.  It's not quite done yet, because the afternoon was booked solid.  I'm debating now whether to go finish it or just call it a night.  First though, I'll go take a peek at what other people got done over the weekend.
Posted by scraphappy at 8:48 PM

What a great project for your daughter...look forward to seeing how it turns out!

Oh wow! You did go on some tangents! lol

I really need to get to my scrap pile. It is about to tumble over onto the floor. UGH!