It is sad to be away from home on the first day of a new mystery.  I have plenty of handwork to keep me busy though.  Yesterday was full of turkey and ham.   Because my mother-in-law was not feeling well, I was put "in charge" of Thanksgiving dinner.  I delegated to Kurt to run his mother's kitchen, but still ended up doing most of the cooking.  Kurt's brother's wife, Barbara, wasn't able to make it, leaving most of the men hanging out watching sports.

The plan for today is to take everyone out to see Catching Fire, but we aren't allowed to leave until after the Iowa game.  Until then, I hope to get some serious appliqué done. 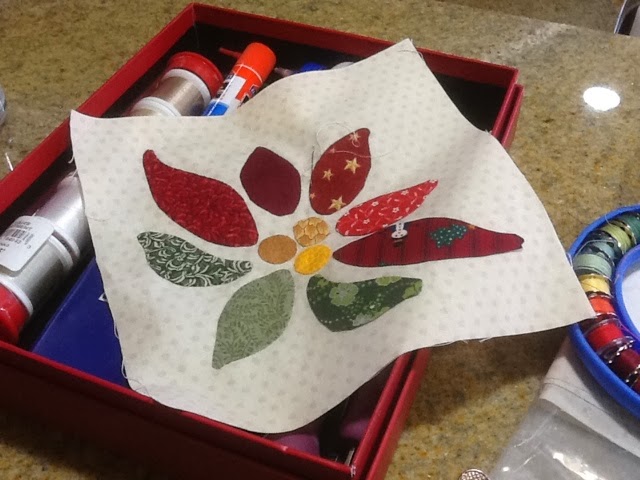 It's good to hear from you via your check-in :) Enjoy the day, and ENJOY THE MOVIE!!!!! Excellent entertainment!

Sounds like you are having a good time with family. Enjoy your stitching and the movie. The clue will be ready for whenever you get a chance to start it.

Hope you got in your stitching time. I didn't have to cook, but did have clean up duty. Which is only fair.

Sounds like there was some good family time going on. Your applique block does look good!