Sewing on a School Night 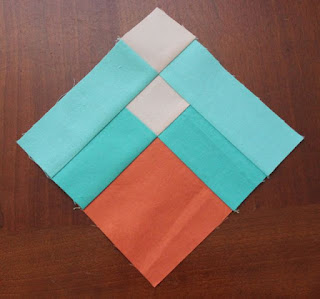 It has been one of THOSE weeks.  I'm going as fast as I can, but not moving forward.  Finally, I just had to take a breather and do something other than grading essays.  So here is Bonnie.  She is block number 16 from the Farmer's Wife 1930s sampler quilt.  Gnomeangel is having a quilt along which just started this week.   I don't actually have the book yet.  It has been on order for a while, but isn't due for a while longer.  I guess that is the problem with ordering a book while there is a quilt-along going on.  Fortunately, the first few blocks are easy enough to figure out without the book.  They even have a tutorial available for people like me still waiting for the books to come in.  I had already figured out the measurements by the time I found the tutorial, but it was nice of them to offer it.  I will try to keep figuring things out until my book shows up, but if I can't, I do have the original Farmer's Wife sampler book from which I can substitute.
Posted by scraphappy at 5:56 PM

I was tempted by this QAL, too, but I have too many irons (and projects) in the fire right now ... so I will just live and quilt vicariously through people like you. Are you planning to use all solids?

It is so pretty-it looks like the southwest to me!

Nice combination of fabrics. I have a week like yours. Here I am on Friday afternoon and I can't for the life of me think what on earth I achieved. LOL

Sometimes you just need to take a break and sew! Hope your weekend settles down and you can enjoy some fabric play.

Pretty block. Hope you get a chance to sew a little in a relaxed fashion!

Very nicely done - the colours are wonderful together.

I don't think the kids realize you put as much work into grading their essays as they do writing them. Fun first block. I saw the quilt along, but am trying so hard to be good and finish projects, not start any.