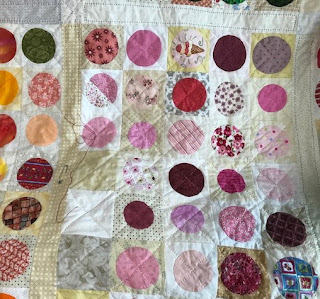 I finished the pink block from Leap Year during family movie time last night.  Actually the kids all joined in for long enough to have pizza and then I watched a movie while quilting the my husband worked on his laptop.  Not exactly high quality family time, but we have all had a lot of togetherness lately. 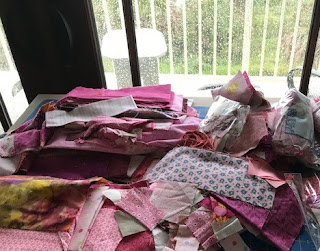 Green felt finished, and so I pulled out the pinks for next month.  It isn't so much cheating as it is working ahead.  It is cold and rainy outside, so I though some new scraps might brighten things up inside.  Is anyone else feeling ready to move on?  June is going to be pink -- just in case you are as desperate as me to move on to what is next. 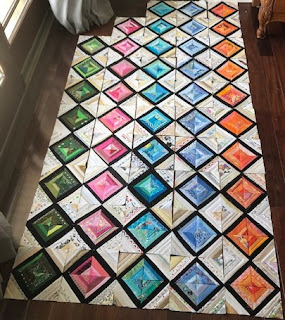 I was going to do string blocks first, but it appears that I already had enough of pink.  I think I'll warm up the iron and get ready to organize.

Posted by scraphappy at 9:27 AM

I like the simple one colorway designs. This one is delightful!

I was wondering if pink was next when you showed you moved onto the pink circles. Enjoy playing with pink. I need to finish up with some dark green before I move onto pink.

Based on the comments I read all month, everybody is ready to move on from dark green.💗💗💗

PINK?!?! Thanks for the early color announcement, Angela. I am SEW ready for a warm color!

I love pink, thanks so much for the early colour confirmation.

Your quilting looks marvellous in the pink blocks! Great job!
Pink is my favourite!

Moving on sounds great to me