Sewing? Not So Much. 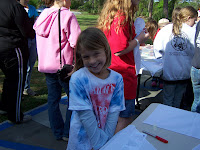 This weekend was our local Girl Scout Camporee. It is for all the troops from our local service unit, which is quite large. Last year there must have been 600 girl scouts all camping out. This year the weather was somewhat less than ideal. Older troops camp for two nights, the first of which brought tornadic activity and torrential downpours. Most of the older girls packed up that morning and never came back. We were lucky to be slotted for the second night which was supposed to be dry, but with temperatures in the 40s. I know to people up north that might seem quite balmy for this time of the year, but not to us Floridians! Most of our kids don't even own a winter coat and have no concept of dressing in layers. I spent a good portion of the weekend explaining that long pants are warmer than capris and tennis shoes are warmer than flip-flops. They just don't get it. 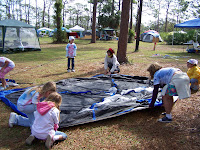 I think they all had a good time, and learned many valuable camping skills. For some this was the first time they had ever camped or slept away from home without parents. Those are big steps for them. Even putting up a tent became an adventure in teamwork.

I'm itching to get back to some sewing which I just haven't had the energy for recently. I got some antibiotics for a lingering sinus infection and am starting to feel human again. If I can just adjust to daylight savings I'll be good to go.
Posted by scraphappy at 3:27 PM

Oh that brings back memories. I had one girl that brought her best jeans and then got upset when they got muddy... had to tell her camp wasn't a fashion statement. Then I had a troop leader hand out mountain pie makers to her girls when a storm was coming and didn't understand when I told her to put them away cause she had 30 little lightning rods running around. Isn't scouting a joy?