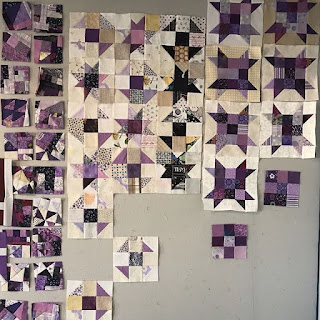 There is STILL one more Saturday left in July. Hopefully you will be able to catch up on any colors you missed along the way. I've been sewing a combination of purple and black so far, my sewing room looks like a big healed bruise!  There isn't a lot of black up on the wall quite yet, but everything is cut and organized.  I should also use today to get a head start on August blocks.   School is just around the corner and things are sure to get crazy in a hurry.  I've been in for meetings already and people are looking a little frayed around the edges.    Our COVID numbers in Florida right now are pretty similar to the same point last year when we had half as many kids all wearing masks.  Just hoping enough of us are vaccinated to make up for all the extra humanity I will see on a daily basis.
Posted by scraphappy at 7:57 AM 10 comments:

\ I never seem to get as much done over summer break as I had hoped. We spent last weekend visiting family in Georgia and doing a few college tours. Add in doctors and dentsists, and another week has come and gone. There is stil time though, before the shift to back to school and I hope to get in some more fabric play time. I hoepe you are making progress on your projects this weekend.
Posted by scraphappy at 7:38 AM 10 comments: 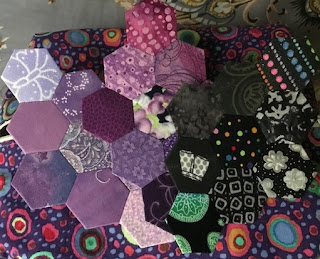 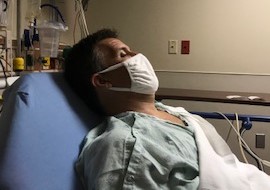 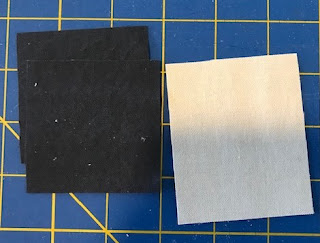 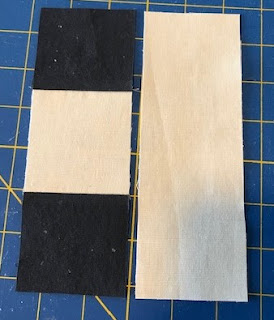 This will be a short row.  I had two navy blues, two browns and one black to use.   Here they are sewn together.
Posted by scraphappy at 12:54 PM 4 comments: 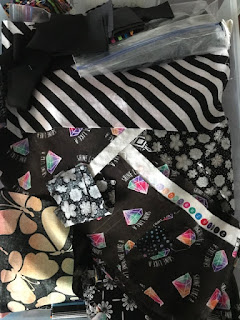 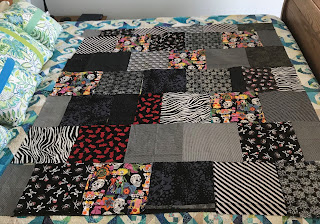 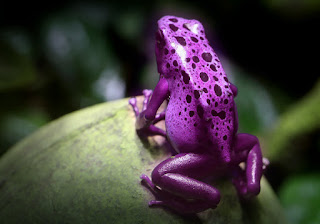 It is the last purple Saturday, though the new month won't start until midweek.  I plan use the next few days to get caught up again.   Poor purple has been the victim of a busy beginning of the summer.  I'm back though from my week in St. Pete and AP Bio reading is done. This week should be nice and calm!  I am looking forward to lots of fun purple blocks to come!

Misterlinky is below.  I know he has been temperamental lately and I will work on the switch to a different service. 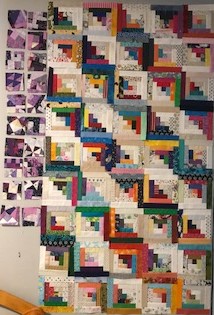 I have been looking forward to purple for so long!  Its been crazy busy so far, but it will be very calm in a couple of weeks and I hope to dig in more then.  I got as far as a nice stack of purple crumb blocks before getting sidetracked with log cabins.  These are extra strips from the Soul Searching quilt of last year.  If there are still more after this I might go with a courthouse steps block.

This will not be the week for sewing though as it is AP Biology reading week.   I am also traveling over to Tampa St. Pete for the end of course question review that usually happens in October.   After that though, things will calm down considerably.  I think I have a meeting scheduled with the librarian during the second week of July, other than that, the schedule remains wide open.

ScrapHappy Saturday - And so Begins Summer 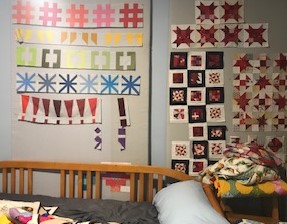 It doesn't feel like summer quite yet. As soon as school ended we were shuttling Anna off to the airport for camp and them jaunting away for a grown up getaway. We are back home today and starting to reassemble everything again. Why is it that everything seems to break when you leave for a few days? The dryer isn't hot and the van won't start. Those should both be fixable, but there were 22 dirty towels and it will take a while to dig out of that. First though, is turning Anna's room back into my sewing room again.  It looks like a strange mashup of sewing studio and college dorm room right now.   That situation is easily remedied.
I also start teaching the first of two online summer classes that I am signed up for this summer.   I'm not sure how it will all work out, but I have a bit of organization to start to get that all arranged.  I am also looking forward to digging out my purple scraps though.  Even though there is plenty going on around here, there should still be some sewing time in there somewhere.
Misterlinky is being difficult today and not uploading images consistently. I tried to do what I could from my end, but was unsuccessful. I have turned in a help request and hope to have the issue resolved soon. Feel free to leave a link in the comments until the issue is resolved.
Posted by scraphappy at 8:02 AM 26 comments: 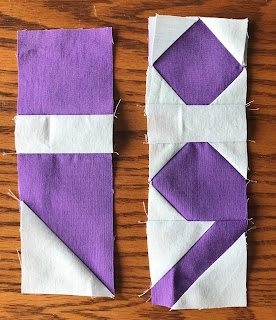 I love purple.  As I kid I always wanted a purple bedroom and my mother would never let me.  Apparently she had a purple bedroom as a child and got tired of it quickly.  That never happens to me.  Purple comes in too many fun shades from lavender to violet with all the shades in between.  I pulled the sewing machine down onto the kitchen table yesterday to whip up a couple of  #FullStop blocks and worked up tutorials for a blocky and fancy version of this month's semi colon.  (scroll down for those).  Anna also wanted 4 new masks for camp as kids under 12 are not yet vaccinated, they are still taking precautions.  She will leave for the summer tomorrow, and though I will miss her, it does mean I will have a sewing room again.   She is SO excited to be back teaching sailing again.  Ryan and Sydney will still be here though, so it isn't quite an empty nest yet.