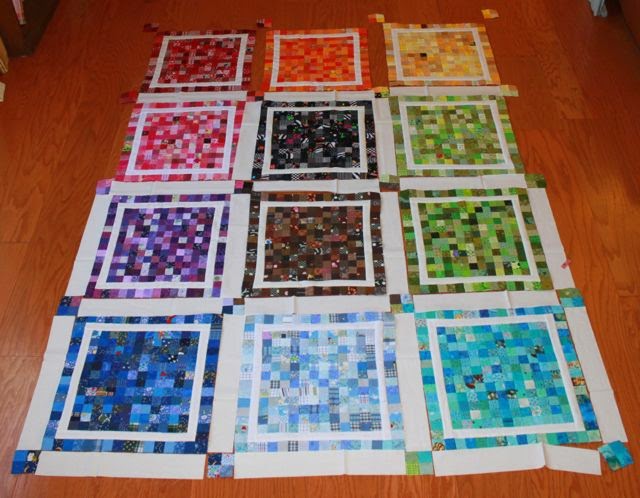 I didn't get much sewing time in on the first day of winter break.  We were working on PVC frames for science fair boards which took trips to Lowe's and Home Depot.  Kurt has everything cut for me and I'm about halfway done with the glueing.
The giant postage stamp quilt is my first goal for the break though.  I finally decided to use four patches as cornerstones, which meant a slightly wider lattice strip than I had originally envisioned.  That, sadly, meant that I am now out of Kona white with 9 strips still to cut.  Maybe I'll shift everything to the center and add the outer border later?  Now that I think about it, I could even use a slightly different shade for the outer strips to achieve a faux border effect.  I think that might work.  I love blogging as a way to work things out logically.  Problem solved with no shopping required.  So nice given the traffic yesterday.  Frightening! 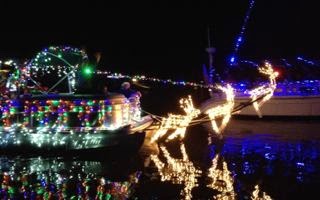 Last night we went to a Christmas party with some of Kurt's work friends.  They live on the water and so we enjoyed a boat parade past his back yard.  This float was the kids favorite.  The reindeer took turns lighting up to give the illusion of flight.  Kurt and the kids have gone to see the new hobbit movie, leaving me alone to sew madly.  Vacation!  Such a beautiful word.
Posted by scraphappy at 9:36 AM

Enjoy the peace/piece and quiet!

I love your idea for finishing it - gives it something special, and a different shade will frame it nicely. So many times I have found that just writing up a blog post helps me gets my thoughts in line and solves a problem for me :)