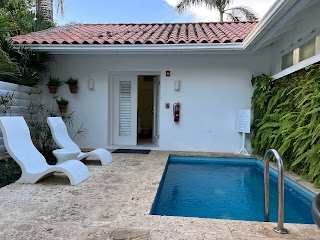 Ah to be home again.  Even better than being back though, was being gone during the storm. We were able to fly out with no issues at all just due to the lucky fact that we had decided to use airline miles which made it easier to drive the longer distance to the Miami Airport.  Normally we would fly out of the Orlando Airport which was closed for the storm.   Many of the people at the resort already were scheduled to fly back through Orlando though, and when they were unable to go home again, our room got changed to this upgraded Villa at no additional charge!  What a nice way to start the vacation as we arrived to texts of the power being gone back at home. 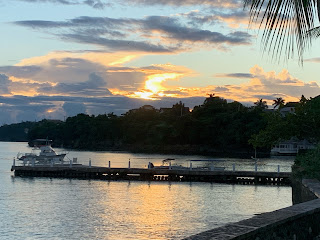 The resort was small, just a little cove in between mountain ranges really, but we didn't really take advantage of the activities they offered, instead lounging by the beach or pool while sipping on icy beverages.   It was lovely just to read books and nap between meals and swims. 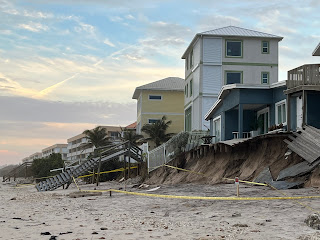 The storm back home was causing lots of beach erosion.   Most of the walkways over the dunes are destroyed and the blue house on our normal dog walking route has been condemned.   It has always amazed us that it was able to survive so close to the water, and this time it just didn't quite make it.   It was already quite run down though it was almost always rented out.  The green and yellow houses next door are still intact, though most of the yards and landscaping have washed away.   Nicole wasn't a very strong storm, but it just managed to hit the beaches which were already a bit rough after Ian.

Posted by scraphappy at 8:31 AM

So glad you were safe from the storm and had no major damage to your home. Riding it out at a resort somewhere else sounds like the way to go! Happy Thanksgiving, Angela!

Glad you survived the storm and so did your home. Where did you escape to? The villa looks wonderful!

OH, my goodness!! What a devastating beach erosion. I feel for the owners!!!

Glad you managed to make a holiday of the evacuation, Angela... And get upgraded to a villa, to boot! That courtyard looks very inviting with its deck chairs and plunge pool.

Awwww. The poor blue house (and the owners.) Your upgraded retreat area looks sooooo relaxing! What a nice surprise.

So glad you could get away for a relaxing break!

Glad you're back and safe! The villa looks like a well-deserved break.

I’m so glad that you able to enjoy a nice respite away from Nicole and that you didn’t have damage. I suppose no power meant throwing out food again, though! We are traveling so my posts are MIA this weekend! Maybe next week!

Your vacation sounds wonderful and relaxing. Missing the storm was a plus!

Glad you were able to enjoy some time away during the storm. Hopefully that's the last one for this year.

Looks like it will be a long time before "normal" is restored after Nicole.