It always happens when Kurt is out of town.  It seems like a nice calm week until everything implodes.  We were getting some trees put in.  Nothing major.  Just replacing some things that died in the record settingly bitter cold winter.  Somehow a couple of trees turned into a big landscaping thing which led to a cut phone wire.  It was actually a nice break from the political adds to have broken phone for a few days.  I finally gave in and called to have the line repaired and they showed up around dinner time to chat with the landscaping crew.  So I'm doing the dinner thing, along with the supervising of kids and friends thing whilst trying to clean up the kitchen and keep an ear out for the workers outside.  Then add the phone guy to the mix and the neighbors milling about talking about the new trees.  It was at this point that the guy from Cub Scouts showed up to deliver the bags for food collection next week.  He wanted to give directions.  Really?  Because I need more to manage at this point in my life?
I think the evening rush has passed.  We're down to one friend over and getting ready for baths and bed.  The workers have left for the night and tomorrow should be a calm day.  Monday and Tuesday required a bit of shuffling to pull off the dual Mom/Dad jobs simultaneously, but Wednesdays are calm and peaceful.  I've even got a friend coming over to work on a crafty Girl Scout project.
I did enjoy having a few minutes this afternoon before the bus to get some yardage ironed.  It's supposed to be border fabric for Starlight.  Though this week doesn't look promising for getting lots done, at least I can get them folded up together so I don't forget what the plan was.  It will be better than leaving it piled about randomly in any case. 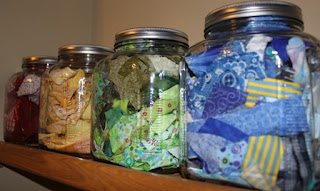 I am trying to work through the scrap basket a bit at a time.  I found these nifty jars while shopping for groceries on the weekend, thinking they might be a more attractive way to store my color sorted crumbs than the Ziploc bags I have been using. My sewing room still isn't put back together again after the carpet, It's all in need of a good sorting and organizing effort which hasn't bubbled to the top of the list quite yet.
Posted by scraphappy at 7:31 PM

What a cute idea for your scraps. Almost too pretty to use!

Sounds like a very busy household tonight! I love the scrap jars. I have so many questions I would like to ask other quilters!!!

I'm wishing I had the room to display them. What an inspirational way to organize!!!

Good idea to collect the scaps like you did it. I hope your sewing room will be finished soon. - I started to make christmas gifts, but there are so many ideas and many persons.
Have a nice day and greetings from Germany
Roswitha

OMG I love those jars! How can you resist sewing those gorgeous scraps into blocks?!?

I really like the idea of scraps in the jars! Too bad my scraps bins are way too full as it is and they would never have jars big enough for me! lol