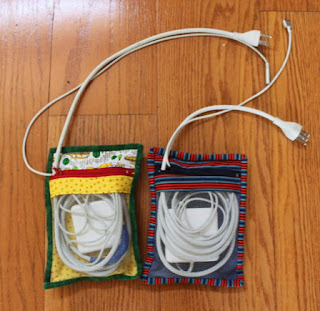 The zipper pouch parade continues.  These are slightly larger than the headphone cases from yesterday.  Just large enough for computer charging chords  In order to make it easy to see which cable is in which case, I made the front from window screen.  We happened to have some hanging out in the storage shed where the lawn mower lives.  I am planning to keep the cords all tucked in safely while the computers are charging to keep them from constantly tangling.  Then, if the computers need to go anywhere, it will be easy enough to tuck in the ends and take the power cords along.  Along with the sewing, I've been cleaning out the closet under the stairs.  We took some overdue books back to the library and did a couple of loads of laundry.  Exciting right?
Posted by scraphappy at 4:03 PM 12 comments:

It is so nice to be back and have time to ramble aimlessly around the house for  bit.  Sunday and Monday I spent painting the main bedroom. 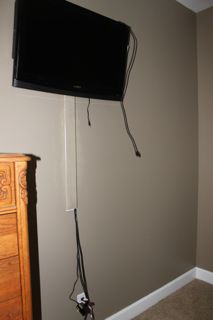 I had to wait until this afternoon for a cord cover to come in from Amazon.  That just got painted.  As soon as it dries, I can get everything put back again.  I did all the baseboards and the ceiling.  Everything looks so fresh and clean! 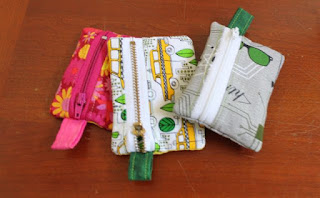 I was so tired and achy from all the moving of furniture and climbing up and down of ladders that I was happy to find something nice and small to play with.  These small zipper cases fit the bill nicely.  They are just the right size to fit earbuds and sew up nice and easy.  I used the tutorial found here which was easy enough to follow, even though I sewed the layers in the wrong order twice before I got it right on case number three.
Posted by scraphappy at 6:05 PM 7 comments:

Life happens. Even with nothing special going on, just a home and husband with three kids and a job and a lot of normal stuff tends to take all the hours out of the day. All of it is good.  I am so thankful for every minute.  It is nice too though, to have a little bit of empty time to fill with beautiful fabric and creativity. 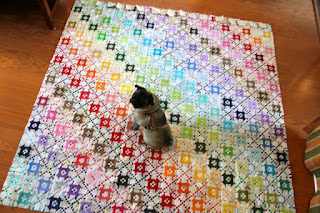 I started this quilt a very long time ago.  At first it was just a stack of tiny nine patches.  I can remember planning it in my head on a family vacation when the kids were just tiny.  They are giant now, how does that happen?!   It comes from the humblest little strips of leftovers.  1 inch strips and 2 inch strips.  But look what they can turn into with a little patience and perseverance.
In honor of the happy scrappiness, I am linking up with Oh Scrap!  at Quilting is More Fun Than Housework. 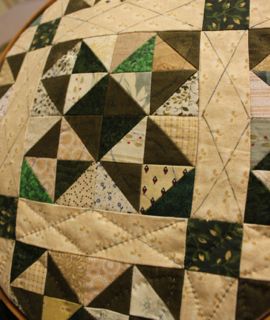 I was happy after returning from all of the recent travels to pull out this small broken dishes quilt and take a few stitches.  There is something so calming about those little quilting stitches.  I think that the kids want to see Finding Dory this morning.  I have two gallons of paint calling my name.  Nothing is urgent though.  I might just go and fondle some fabric first.  The calm before the day begins.  I'm also linking up with Slow Stitching Sunday at Kathy's Quilts. 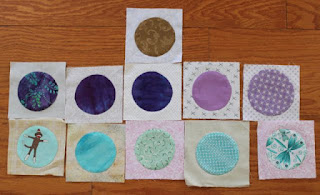 Ah to be home again and ready to play with fabric again.  I had plenty of handwork along for the trip, but most of the time the bus was too bumpy.  Still, it was nice to have a little handwork just in case.

Back into Home Mode 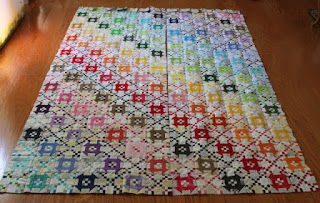 How wonderful it feels to be home again.  Back in my own bed.  Caught up on laundry.  I got the first two sections of OMG sewn together.  Just one more section to go......  I am hoping to be able to settle in and get quite a bit done before we have to be off again for our family vacation later this summer. 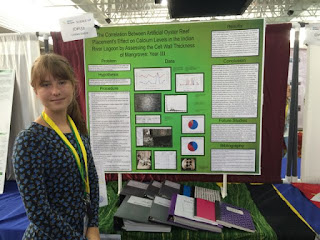 Anna and I had a great time at Genius Olympiad.  It was quite chilly in upstate New York.  A nice change really from the summer baking of Florida.  Anna thought that staying in dorms and eating dorm food was quite exotic. 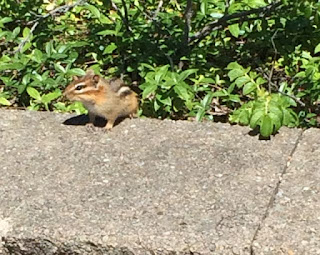 They had chipmunks!  So much cuter than our squirrels, though they had those as well. 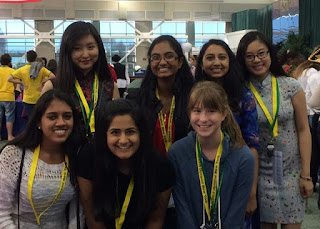 Anna met a nice group of girls from Florida.   They were mostly from a private school in Orlando.  Also, two sweet girls from Kentucky who were in the short film category.  Kelly came alone from Pensacola and she joined us later for the college tours. 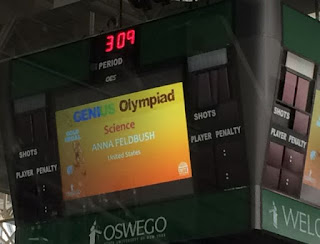 After getting an only an honorable mention last year, Anna was so excited with her gold medal this year!  I'm so proud of her for sticking with it and improving her project so much. 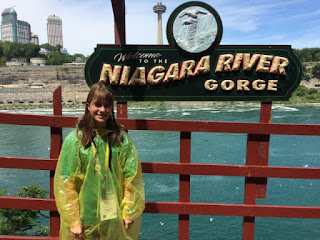 Niagara falls was quite damp!  Because we had done the boat tour last year, we went into the caves this year and enjoyed the view very much. 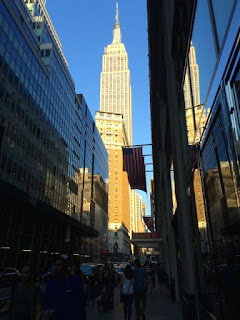 Then we were off for a New York, DC and Ivy league tour.  I had never been to the city before.  It was quite stimulating.  We had already done the DC tour not too long ago, but there is always more to see there.  I learned quite a bit during the college tours.  It was a glimpse of the road not taken.  I was so thankful to be going to college at all, and fancy out of state schools were never on my radar.  It was all very enticing though, so much opportunity for the lucky few.
Now it is back to real life again.  Anna and Ryan both have summer courses to work on.  Sydney seems to be wasting her summer away on Netflix.  Maybe I'll go and see if I can get them moving. 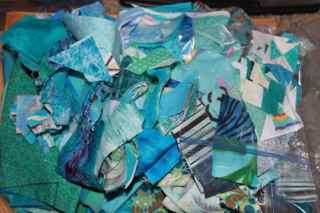 I think that I have nothing to do today.  Anna and I are leaving for a science fair and college tour tomorrow, so I'd like to make sure that I have plenty of handwork ready for the bus trip.  First though a bit of sewing sounds like the plan.  This month's sampler block will be a split pinwheel in a 6 inch size.  I did one last year, so that tutorial is still available here.  I'll work up a new one today though, along with alternative instructions for the non specialty ruler folks.  I need to work on some pdf files as well, hopefully summer will settle down soon and give me some time to get caught up, and maybe even work ahead?
How are your aqua scraps coming along?  Misterlinky is below.  Please share with us all. 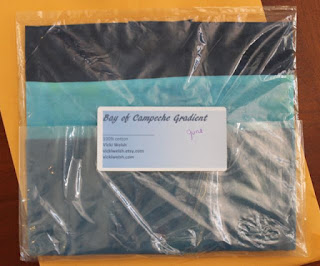 Welcome to the soothing seas of the Caribbean.  June will be all about blues with a tinge of green.  In recognition of the new month, Vicki has sent this hand dyed fabric gradient called Bay of Campeche for one lucky Rainbow Scrap Challenge participant.  To enter the random drawing, just leave a comment on this post.  Misterlinky is below, share your progress and plans with teal blue.