ScrapHappy Saturday - Finishing Up and Catching Up 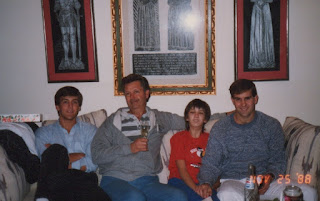 I worked this summer on scanning in some of the photos which came to us when Kurt's mother passed away last winter.  This one is from Thanksgiving of 1988.  I met him for the first time in May of that year.  Everyone looks so young!
I hope those in the US are all finding some time on the long holiday weekend to squeeze in a little bit of sewing.  I've had some driving time, so handwork has been a nice companion.  No photos yet.  Hopefully you will all help fill the void with some fabric goodness or holiday cheer.

So sorry to be off to a late start today.  I completely forgot to post before leaving for my long run.  12 miles today!  Last big run before the next half marathon.  After that I think we'll drop back into low gear for a while.  More time to sew :) 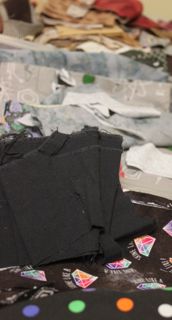 It is the second weekend in November and I have finally dug out my dark scraps.  I have three drawers to play with this month, black, grey and brown.  There is actually quite a bit of good stuff to play with in these bins.  Can't wait to dig in.
We had yesterday as a holiday, so I am all rested and refreshed.  I was scheduled for a 10 mile run this morning, but my running partner came down with a migrane.  I already have my running shoes on, so I am debating what to do next.  It is a beautiful fall day, here.  It has been so nice to turn off the air conditioner and enjoy the fresh air for a change.

If you still need another color, then November is for darks -- black and brown.  If you are not in need of another color though, this is the time for finishing.  Please use the last two months of the year to take stock, add in whatever extra something your quilts might be asking for, and best of all, put some tops together!
I did a spree of finishing things earlier this year, so I believe that I have several tops awaiting quilting to think about this month.  I just had a load of shirts dropped off yesterday for a graduation t-shirt quilt, so that will move to the front of the list.  Anna is graduating this year too, so I'm guessing she will want one of those as well. 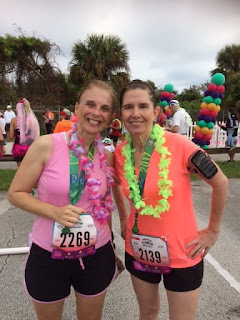 Last Saturday was my half marathon!  It was a beautiful day.  The weather was picture perfect.  Three miles of the run were on the beach and we were just all amazed at how perfect it was to be running along the ocean with the waves crashing.  Then, just when everything seemed ridiculously picturesque, a troop of lifeguards ran by carrying a huge American Flag.  Though I was pretty tired by the end, a half doesn't leave you wrung out and exhausted like a full marathon.  Meisje and I had to much fun that we signed up for another half next month. 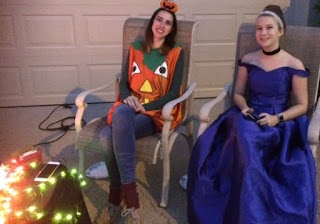 Meisje is a teacher too, and we talk about absolutely everything during long runs.  She thinks that my quilt blog is too much about quilts.  She thinks it is way too boring for regular people.  I used to put in more personal stuff when my mom was alive, she was a big fan of my blog.  Since then though, It has gotten a little more quilt centered.  So, because Meisje asked, here are a few Halloween pictureres from Tuesday.  Anna and Allie were Cinderella and her pumpkin.  They hung out down in front of Allie's house. 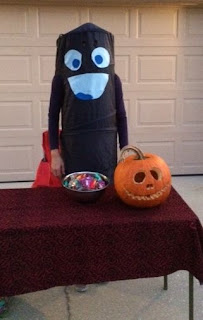 Anna had made a tube worm costume, but ended up letting Ryan wear that.  He volunteered to sit in front of our house to pass out candy.  I got sick on Tuesday and spent the night cuddled up on the couch under a quilt.  Sydney was Boo from Monster's Inc., but I was never able to get a photo, she had two friends over and they were off around the neighborhood on their own. Usually everyone hangs outside while the trick-or-treaters roam.  Kurt was out of town this year, so celebrations were more mellow than usual.