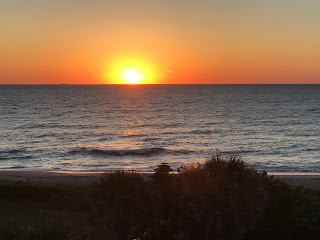 Just 18 more school days.  Not that anyone is counting.  15 before graduation and 4 before my big AP test.  Again, not that we are all counting days. I always tell the kids that they should try to just enjoy where they are now and  not wish their lives away.  Still, I have to believe that next school year will be more normal. 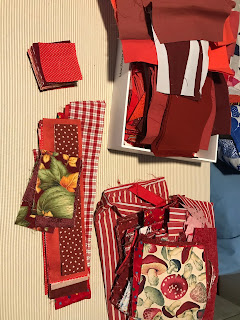 I did some sorting and organizing of red.  Looks like I have plenty of variety to play with. 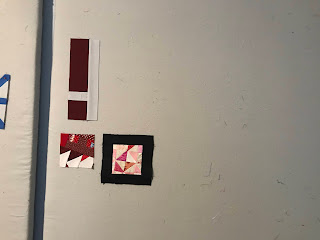 I haven't gotten much sewing done yet.  Just some exclamation marks and a few crumbs.   Today is pretty wide open though.  Some weekend cleaning and laundry of course, but plenty of time to putter with fabric.
Posted by scraphappy at 8:58 AM 6 comments:

Version 2 of the Exclamation point block

Today I learned that exclamation marks were originally known as marks of admiration.  What a nice idea.  You can end a sentence one of three ways, with a period.  Full stop.  With a question mark to indicate a query.  Or with an exclamation mark to indicate excitement, astonishment, surprise or admiration.
My first version of the exclamation mark was simple but blocky.  I really wanted to have a more angular version though and had to dig in and experiment with several techniques to get it to work.  you could use templates of course, but the angles are still a little tricky.  Tricky angles make oversized pieces more desirable, and so I decided to look into paper piecing options.   I've done traditional paper piecing in the past in which the pattern is sewn directly to the pattern.  Given the fairly simple nature of the pattern though, I wanted to try out freezer paper piecing which allows the same template to be used again and again.   I have used freezer paper in applique quite a bit, but this was a new method for me.
You can run freezer paper through a regular ink jet printer if you trim it to size but I chose to draw it instead.
It is easy to do, and opens up so many new avenues for patterns.   I can see how much fun it would be to draft wonky log cabins or fun star blocks using the same method. 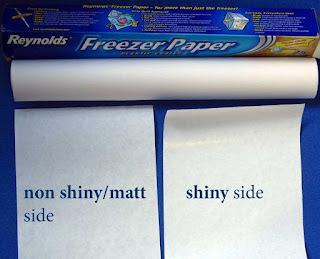 1. Start with a piece of freezer paper.  Freezer paper has a slippery wax covered side and a regular paper side.  I think this is to keep moisture inside of frozen food, but it works so well for quilting!  If you can not find or do not have freezer paper, you can use regular paper and traditional paper piecing, you will just need to make a new copy of the pattern for each block. 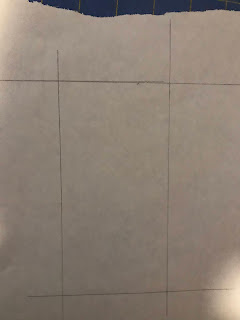 2. Draw a rectangle on the non waxy side of this paper that is 3 by 6.  This will be the finished size of the top part of the exclamation mark. 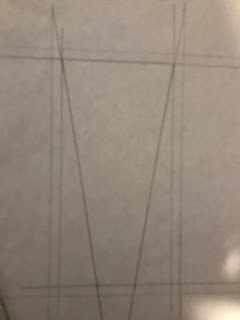 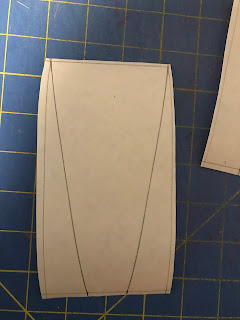 7. Trim your rectangle about one eighth of an inch outside the outer border.   It is important that you do not have a larger outside border so that you can trim your block without having to run your rotary cutter through the freezer paper which might dull it.  You will eventually trim your block one quarter of an inch outside your original rectangle. 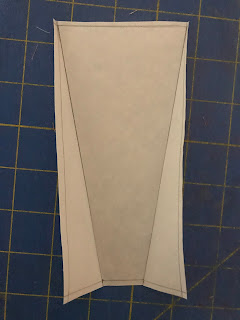 8. Fold along each diagonal line to crease the paper using a straight edge.
9. Start with a square of red fabric at least 3.5 by 6.5.  It is Ok if it is a little larger as you will trim it later. 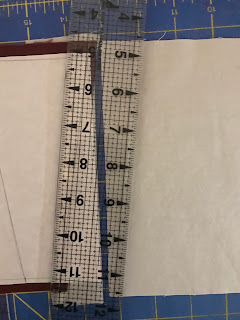 10. You will also need two rectangles of background fabric for the two edges.   They should be at least 2.5 by 6.5, but with a slight angle which mirrors the angle on the template.  I found it easiest to lay the background fabric next to the template and use a ruler to follow the angle.  You could also cut an extra piece of freezer paper and use it as a template to cut the odd triangles.   When paper piecing, bigger is better, so make these side pieces extra large and trim away the extra later.  So much easier than worrying.
11. Press the red fabric to the wax side of the freezer paper , leaving at least a quarter of an inch extra around all outside edges.   The wax will melt just enough to temporarily stick the fabric and paper together.  It is like magic!   Best of all, it is reusable. 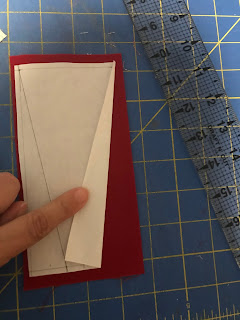 12.  Now carefully pull up the corner and fold it back along the creased line. 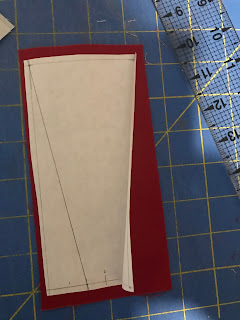 13. Trim away the red fabric one quarter of an inch beyond the seam allowance. 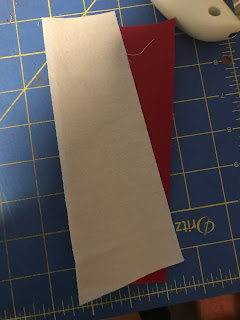 14.  Now add the background fabric, right sides together to the red fabric.  Line up the edges 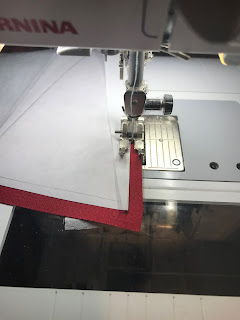 15.  Now the fun part.  Turn the whole stack upside down and sew through both pieces of fabric just at the edge of the folded freezer paper.   It is a little game to see how close you can get to the paper without going through it. 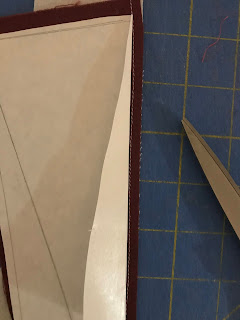 16. Now fold the background fabric and freezer paper open and iron them together.  The drawn line should line up with the seam, but because you didn't sew through, you won't have to rip it off later. 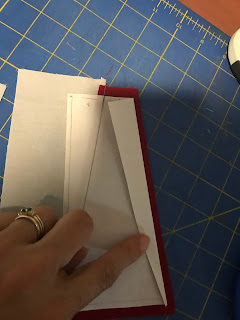 17.  Repeat the same process on the other side.   Notice the oversized nature of my side triangle.  It ended up big enough that I could use  the extra to cut my dividing strips in the end. 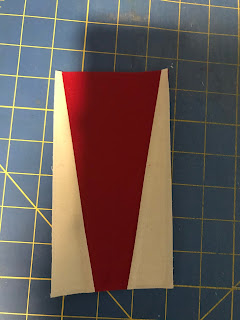 18. After both triangles are sewn on, trim your finished unit to 3.5 by 6.5 inches.   The cutting should be just outside the paper portion of your template. 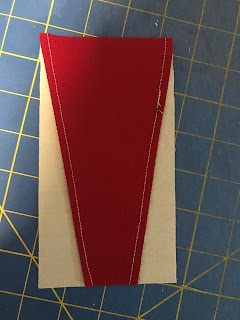 19. Peel the freezer paper carefully away from the finished block so that you can use it again for the next block.  The wax will still be on the paper.   I was able to make all 7 of my blocks with just two paper templates. 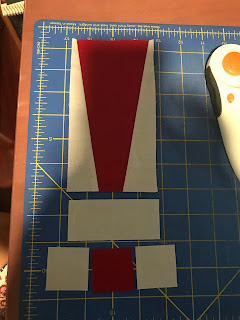 20, To the top part with the jaunty angles, add a divider strip which is 1.5 by 3.5 inches
21. Finally, add the dot to the bottom.  This part is just two 1.5 inch squares of background fabric surrounding a 1.5 inch square of red.  Press the seams toward the red. 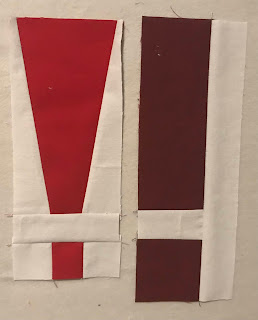 Here is the new block next to the original blockier version so that yo can decide which you like better and if it is worth the extra effort to have angles.  They do end up at slightly different heights, but one inch won't make much difference in the size of the finished quilt. 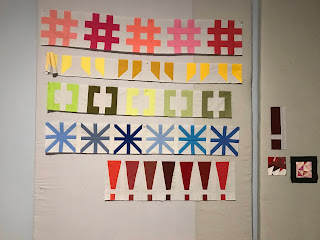 After trying out both patterns, I decided that I definitely preferred the second version.  You can still see the blockier version though, so you might like it just enough to avoid paper piecing.  I was shocked to find that I had 7 different shades of solid red.
I made 7 blocks and sewed them together with dividing strips of 1.5 by 8.5 inches.  It is still a very short row, but I am trying to add in some variety of  lengths to add visual interest to the finished quilt.  The yellow quotation marks are still oddly long.  I might shorten that row later.
Posted by scraphappy at 1:33 PM 5 comments: 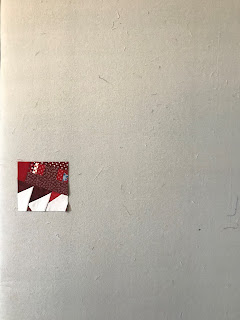 I love the start of a new month!  The wall is empty again and ready to fill with red blocks. 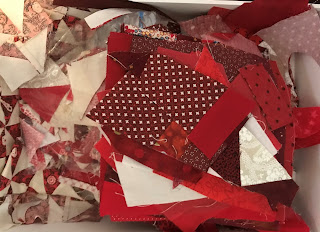 I found plenty of red scraps to play with.  Such a change from the blues of last month. 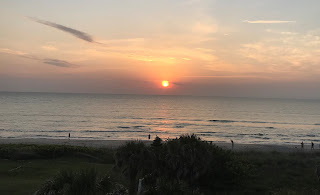 What are your red plans for May?
Posted by scraphappy at 8:17 AM 9 comments:

I will be back shortly with a tutorial for the May Fullstop block which will be an exclamation point.  There will be two versions again this month.  This simple straight punctuation and a more complicated paper pieced variation with jaunty angles. 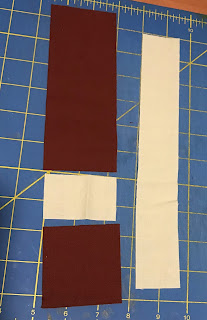 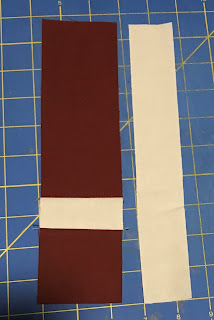 Sew the small divider of background fabric between the long and short red pieces.  Press toward the red.
Next, sew the long divider vertically to serve as a divider between each block.  Press the seams away from the exclamation point and toward the dividing background square. 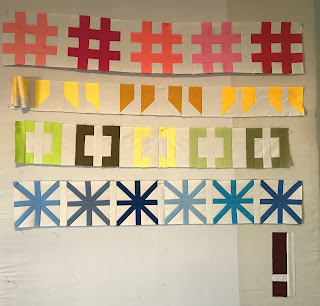 Here is the wall so far.   I like to play with the proportions before I commit to an entire row.
Posted by scraphappy at 8:16 AM 1 comment: