Quilting on a School Night

Academic team crushed the competition last night at the district championship!  Sometimes they don't do well under pressure.  Last night was not one of those times.  They won easily and I couldn't be more proud of how well they played.  Three from my team will combine with three from other schools to make the all-star team which goes on to the state competition.  I'm glad to have a short break though as those practices won't start until after winter break.  A free Monday evening will be a nice change of pace. 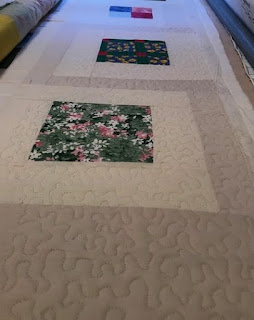 I had to get in a quick run tonight to make sure I'm all ready for my race this weekend, but after that, I popped into the sewing room to get a quick start on the framed four patch quilt.  I got in one row and now am calling it a night.  Kurt brought me some hot chocolate when he came home from volleyball.  It got chilly today and hot chocolate sounds just perfect to take off the chill.  I hope you are all staying warm as well.  It sounds like lots of people are getting some real winter weather and not the fake seasons that we have here in Florida.
Posted by scraphappy at 9:19 PM 5 comments: 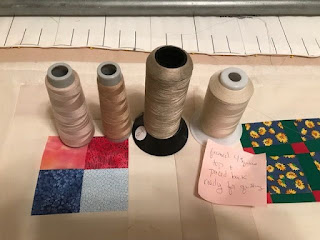 It didn't take long after my sister's family was gone to have the quilting frame set up again and loaded with a quilt.  It has been sitting there for months unused, but now I am in a mode and ready to finish some quilts off before the end of the year.  I have a bunch of projects hanging in the closet, each with a little note reminding me what is going on.  This one said that framed four patch top was done and back was pieced and ready for quilting.  I was lucky to find enough batting to sandwich it up without even having to piece.  After this one though I'll have to start whip stitching some extra batting or do a bit of shopping.  I briefly pondered braving the Black Friday sales to stock up but decided against.  I'm not all out yet.  So I've got several shades of neutral thread to ponder and the quilting can start any minute.  Well, maybe not any minute.  School starts again tomorrow, and it is the last academic team competition on the year.  Maybe Tuesday though?  In any case, it is all ready and waiting whenever there is time again.
Posted by scraphappy at 6:00 AM 3 comments: 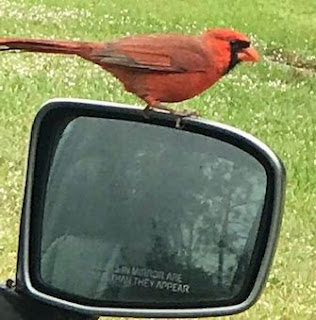 I almost always go to my friend Meisje's house for long runs.   She lives in a neighborhood of large lot houses with broad winding streets and she always has cold Gatorade in the mailbox for us to enjoy when the run is done.  Whenever I park on the street, there is a cardinal who comes to visit my car.  I've come to look forward to his visits and he never fails to come and perch on my rearview while we run.  Here he was waiting for us at the end of our 10-mile run this morning.  Our last long run before the official half marathon next weekend!  I came home from that had some breakfast, a long shower, and a nice nap.  Now all is right in the world and I am ready to start the rest of my day. My sister and her crew were here yesterday for the holiday.  They were off again first thing this morning so it was a short visit.  Hopefully, we will be able to swing through and see her at some point over Christmas or in the new year.
I was able to finish up the quilting on my postage stamp star quilt before they came. As it turned out, I had plenty of time to put on the binding as well, but I had already cleaned everything up by then.  It is all out again now and it should not take long at all to get the binding machine sewn down.  I think blue scrappy will finish this quilt of nicely.  It is always so lovely to have the hand sewing to work on in the evenings.  It gets dark so early right now that having something to keep me awake until bedtime can be beneficial.  Be sure to visit Kathy for other slow stitching Sunday projects.
Posted by scraphappy at 3:14 PM 5 comments: 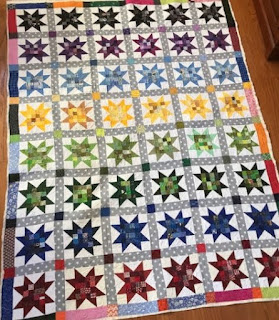 I finished up the postage stamp stars quilt yesterday just before disassembling the frame to make room for my sister to come and visit.  I pondered getting the binding sewn on but decided against.  The gang should be here any minute and we have the big meal planned for today instead of Thursday.
It is almost noon and nobody is here yet.  I could have finished that binding afterall.  Bummer!
An InLinkz Link-up 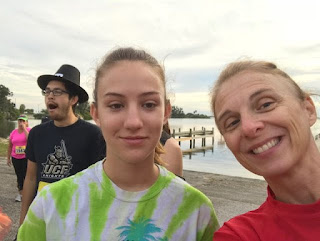 Traditionally a day for eating turkey and watching football.  We are waiting until my sister arrives on Saturday for the main event, and so today was mostly a beautiful relaxing day around the house.  Sydney and I went out this morning to run a 5K.  I took a selfie before the start of the race.  At the time I didn't realize that I was catching a yawning pilgrim in the background.  As it turns out, when I posted it on facebook, I learned that he is the brother-in-law of one of my teacher friends.  We live in such a small world sometimes! Kurt was off to pick up Anna from New College this morning and then we were all back together and settled in to watch the Thanksgiving day parade.  We even saw a bit of the dog show after, but it was making our poor puppy Lizzie go crazy.
I then managed to almost entirely finish the transformation of the sewing studio into the guest bedroom.  I say almost because I could not resist loading a quilt onto the frame before I have to take it down to make room for the guests.  I still have an entire day to play.  It looks like the girls have mostly taken over side dish and dessert preparations and Kurt is going to smoke the turkey on the big green egg, so I might just have a bit more free time tomorrow. 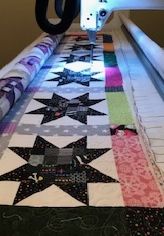 I got a good start on quilting before the first bobbin ran out.  I went ahead and used the thread that was on the machine because it seemed more efficient than redoing it all.  There is white in the top and light blue on the back which should work just fine and dandy I think.  Sydney is having two friends sleeping over tonight so that they can get up early and do black Friday shopping.  I'm planning a run with a friend and Kurt is off to volleyball.  It is nice to have a long weekend to enjoy it all.
Posted by scraphappy at 9:45 PM 3 comments: 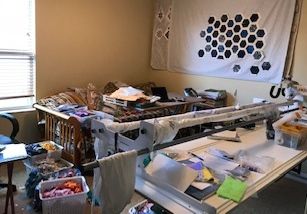 We are having company next week.  My sister is going to be at Disney over the holiday and will come to stay with us on her way home.  To stay in the guest bedroom that isn't very guest ready quite yet.  Today was the start of turning my "sewing studio" back into a bedroom.

All that cleaning let to a break to walk around the block.  The sandhill cranes were out and about enjoying the fall weather. 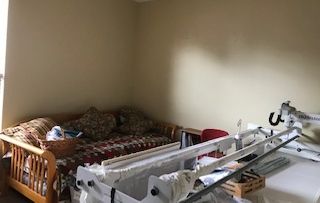 It isn't quite done yet, but it is starting to look more like a bedroom I think.   I am thinking that there is still time to do a bit more sewing first. 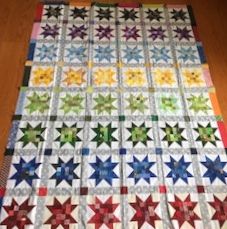 While digging around in the closet, I couldn't resist the urge to pull out a quilt in need of finishing.  These stars were hanging nicely with fabric waiting to be pieced into a backing. 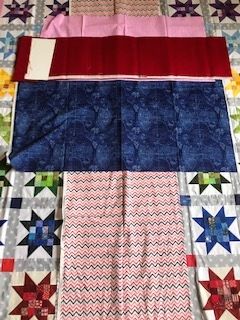 There is a pink and blue chevron that I thought might look good with a bit of blue and pink or red.  I should have time to get that on to the next stage before my sister gets here. 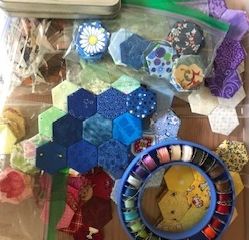 Then, I pulled out my hexies so that I can work on some hand stitching after the sewing room is completely pulled apart.  I think I'll go and visit Kathy to see what handwork others are up to today and Oh Scrap!  To get more scrappy quilting inspiration.
Posted by scraphappy at 3:11 PM 6 comments: 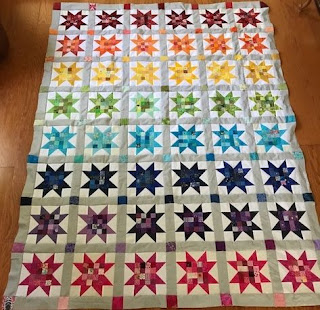 Though I am off to a very late start today, it is for the very best of reasons.  It is beautiful outside, I have just gotten back from my first run in 2 weeks and I am finally starting to feel human again after being sick for what seems like a very long time. I thought I was getting a simple head cold, but after spending 4 days solid in bed, I'm not sure what it was.  I'm just so happy that it is finally going away.
Does anyone else get that end of the year burst of energy that makes them want to wildly start finishing things off?  Maybe I will even fire up the quilting frame.  I think I am ready to cross some projects off the list to make room for something new in the new year.  I hope you are all feeling the same way.  The linky is below, please share whatever it is you are wrapping up or starting fresh right now.  I'm sure a lot of you are anxiously preparing for the new Bonnie Hunter mystery.  I've managed to avoid the temptation so far.  We'll see if the resolve holds. Hopefully with the end of the year rapidly approaching, you are thinking about the loose ends to be tied up and the projects to be finished.  I know I am.  Strings blocks seem to be taking up most of my sewing time right now.  There is something so soothing about the simple repetitive sewing and trimming.  Even the paper tearing and mess it creates is enjoyable for me right now. 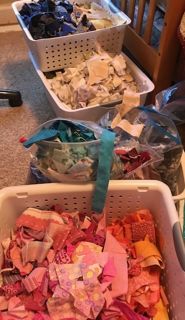 The Wrap Up Begins

October is done and November has begun.  There is no official color for the last two months as they are a time for catching up, wrapping up and finishing up.  Feel free to fill in though if you need more blocks, more colors or to use more scraps.
I'm off to a late start today.  I should have hit "post" before I left for my run, and it was 9 miles this morning, so that can get long when you run as slow as I do.  The weather was beautiful today,  cool, with a hint of fall in the air.  That doesn't happen often in Florida so it is nice to have a change of pace. 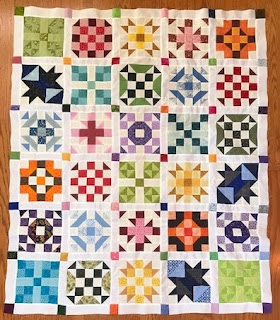