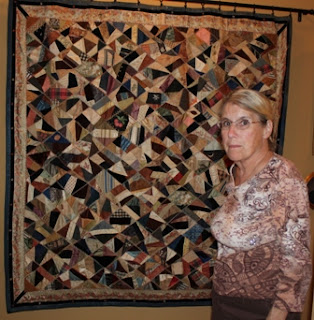 As nice as it is to go and visit with family, it's always so nice to come back home again.  We ended up leaving last night after dinner so that we could go partway and then get up in the morning for the second half. That got us back in time today to make ice skating practices and get unpacked and settled in again. 11 hours is quite a drive so it was nice not to have it all in a single sitting. 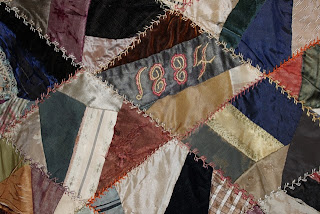 While we were there, I had my mother-in-law show me her Crazy quilt. It belonged to her mother, and according to the embroidery, it was finished in 1884.  It is full of velvets and laces and ribbons and adorned with lots of lovely handwork.  Some of the bits are beginning to wear away, but considering its age, I'd say it's still in pretty good shape. 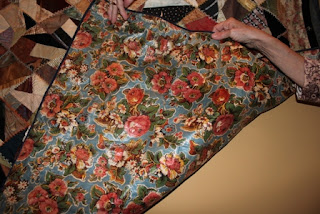 When she had it appraised, she was told that the chintz backing was one of the things that added to its value as it had to be shipped all the way from England. It's never been washed and the fabric is quite crisp.
While we were there, she also got a family tree in the mail from a relative who has done quite a bit of genealogy.   I dabble with the family tree from time to time, so I'll have to compare his tree with mine and add in the missing relatives.
Posted by scraphappy at 8:31 PM

Glad your trip appeared to be safe-n-sound and enjoyable...

I always love the look of crazy patchwork, and one is on my long term to-do list, but gathering a range of different fabrics isn't that easy. I've 'dabbled' in my family tree too, though I haven't looked at it for a year or so. Parts of it have been easier to trace than others, but I expect you've found the same.

The Crazy Quilt is great. I love such old quilts very much.
Have a nice week
Roswitha

Great quilt!! Thanks for sharing it with us! Glad you are home safe and sound. :)

Love the crazy quilt. Glad you had a nice trip and are home safe and sound.