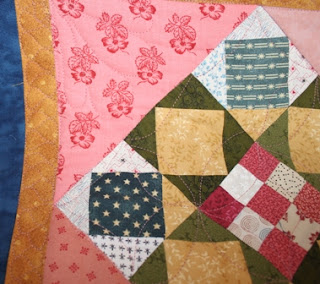 I finally got Double Delight loaded onto the frame this afternoon.  I've been saving it until I got better at machine quilting.  Eventually I just wanted to get it done though.  I am doing a continuous nine patch pattern in the star blocks and a flower kind of thing in the setting triangles and pink squares.  The inner yellow border is getting a ribbon candy treatment and the big blue border is getting saved for later.  I found out after I got it started that the blocks on point are just bigger than the available quilting area, causing me to make some adjustments as I figure out how to quilt half a block at a time.  I think I got it about half done before it was time to take Anna to ice skating.  Ryan's year end football party was after that, so most of the afternoon was spoken for. 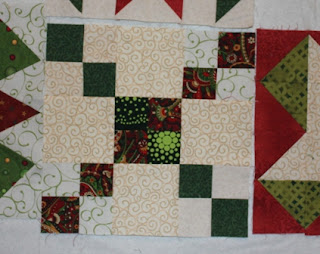 I took the extra fabric from Amy's BOM to the iceplex and started trimming fabric for the alternate squares.  I'm going with an Irish  Chain sort of block to give the sampler squares some room to breath.  I've got the blocks separated into 10 kind of bright and 10 more muted.  It should make a nice pair of Christmas snuggle quilts. 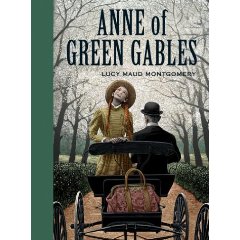 I have been enjoying free books on the i-pad.  The first one I downloaded was Anne of Green Gables because  I thought it might be a nice one for Anna to read.  I'm not sure how I missed this series as a kid.  It is just such a delightful story.  I've been laughing out loud as I read it.  I'm sure people think I'm a bit odd, but there are worse things to be than a bit odd. 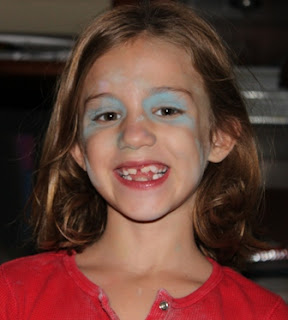 I couldn't let a post go by without another silly picture of Sydney.  She decided to use sidewalk chalk as make-up.  Anna and Ryan both have field trips tomorrow and Sydney is going to the dentist to have a tooth pulled.  She's a little bit bummed about that.  Maybe we'll go out for ice cream after.
Posted by scraphappy at 8:41 PM

I can't wait to see how your BOM blocks and Irish-chainy-blocks wind up.

And sidewalk chalk....that is ONE thing my girls have not "tried" yet :0)

nice quilting! The hardest part still for me is deciding WHAT to quilt. I always second guess myself

Lol, Anne of Green Gables was the first book I downloaded to my ipad, just as enjoyable the second time round. I also got Little Women, another good read.

Way to go finishing up one of the previous mysteries! Wish I would finish up the Carolina Christmas! maybe you will inspire me!

Hi Angela,
the two blocks are nice inspirations for me. Good luck for Sydney at the dentist.
Have a nice and creative day
Roswitha

Way to go on doing some custom quilting on the Double Delight! I'm sure you will be glad to get it finished. :) And I read a lot of the Anne stories as a kid. I really enjoyed them!

So excited to see Double Delight coming along!

So excited to see Double Delight coming along!