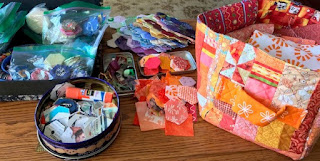 The Superbowl is tonight.  I would be hard pressed to remember exactly who is playing, but I know it isn't New England.  We don't have a party to go to tonight, so I will be able to get plenty of slow stitching done between commercials.  I went to pull out orange diamond hexies so that I could start sewing them together, but there weren't any!  Orange is a funny color that way.  So I dug out the orange scrap bin and got some hexies ready for prep work tonight. 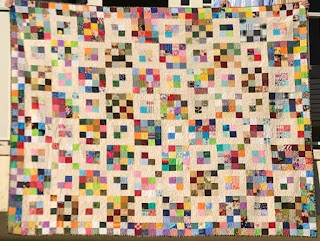 My slow stitching time is open again now that the Four Squared Scrap Quilt is finished.  I had to take it away from Kurt for long enough to get a photo.  It's been chilly again and a having a quilt to snuggle with on the couch is quite handy right now.  It seems wrong when it is chilly at the beach.  It is supposed to be back into the 80s by the middle of the week though, so I won't worry too much. 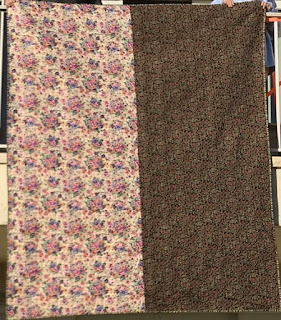 Here is the back.  working to use up all the odds bits and pieces that don't go with my bright and happy rainbow motifs.

I've been experimenting with patterns for a new quilt for the master bedroom. These Churn Dash blocks with chains were my first attempt.  They got a thumbs down for not being "beachy" enough. 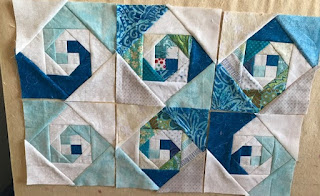 Take 2 is a Snail's Trail Block.  With or without the Storm at Sea lattice?  I haven't gotten quite that far yet. I need to figure out the rotation.  I think I should be making two different blocks instead of having them all rotate the same way.  I messed up one of the blocks entirely, but I think I've got the idea now.
I'm linking up with Kathy for Slow Stitching Sunday and with Cynthia for Oh Scrap!  Sunday is a nice time to catch up with everyone.
Posted by scraphappy at 9:40 AM

I like the churn dashes quilt but agree not too beachy. The snail's trail definitely more beachy with a feel of waves rolling. Good luck

The churn dash might not be a beachy block, but the colors are spot on!

Your Four Squared Scrap Quilts is wonderful! I love both your ideas for a "beachy" quilt, but the snails trail looks more like waves. Good luck deciding!

Both Churn dash and snails Trail look lovely..we will be watching SB at least as long as it takes to eat snacks ;))) hugs, Julierose

It's good to know that quilters in Florida have a reason to keep making quilts! The Four Squared quilt is wonderful! I'll have to remember that design. Hope you enjoy some slow-stitching during the Super Bowl tonight - I'm planning on that, too!

I love your snails trails blocks!

Great projects, I love your snails trail blocks! In my colors!

Love those snail trail blocks in this Caribbean water colors.

Such lovely snail's trail blocks. I love the colours.

Oh those snails are definitely beachy! I like the churn dashes too, but they don't have that wave vibe going on!

Congrats on your quilt finish and best of luck agreeing on a new quilt for your bedroom!

Why, I love your Churn Dash quilt....it is beautiful. I don't have a lot of orange in my stash either.

The churn dashes look great and the waves are stunning.
Your four squared is looking good too, I'm not sure I'd want to part with it, even for a photo shoot.
Have fun with your orange hexies.
I'll be back to link up, just as soon as I make my blocks.

Personally I like both blocks, and I love the colours. I haven’t any slow stitching just now, but I do have a new pattern for a small Christmas appliqué quilt. Mind you it will probably take me five years to finish it at my current rate!

Wow! Your Four Squared Scrap Quilt is amazing! Will you miss working on it? I do sometimes! I love your Take 2 -- although I think the colors of both of them make either appropriate for a beach quilt! Maybe without the lattice? It's hard to get a sense of it with just the six blocks, but I think I'd prefer them without. Of course, beauty is in the eye of the creator, right?! Have fun playing! :)

I didn't find many orange hexagons either, but enough to work with for the month.

Congrats on the bright scrappy finish! It's always a good sign when someone has decided a quilt belongs to them. Good luck working out a design for your bed. It took about 4 years before I found something My Guy could live with and then he changed his mind to a project I was working on for something else. Oh well, I still get new quilt on the bed after 12 years with the current one.

I love your four-squared quilt, and that beachy, wavy one is going to be a beauty!

This is an open invitation to evryone who is ready and willing to become part of the world's biggest conglomerate and reach the peak of your career. As we begin this year's recruitment program and our annual feast of harvest is almost at hand, so we're open for anyone who is willing and ready to become one of us. Are you a businessman/woman, politician, singer, student, Model, Graduate, Banker, Engineer, writer, pastor, footballer, barber, dancer etc. and you want to be rich, powerful and be famous in life? If yes, you can achieve your dreams by becoming a member of the Illuminati brotherhood and receive a monthly salary of $500,000 USD. The Great Illuminati district is ready to offer you a life time opportunity, we are ready to change your life, make your Dreams come true and grant all your heart desires.

Below are 100% guarantee, once you're a member of the ILLUMINATI:

With this, all your dreams and heart desire can be fully accomplish, So you're advised to make up your mind and join the Great Illuminati Brotherhood and become rich and famous in life population and also be protected from all evils against you and your family.
I want you to know that if you think we're not real or been scammed is what you're afraid of, please you shouldn't be because this organization is a 100% guarantee and with the written guarantee you have, you'll know that this Brotherhood organization is real, safe and legit, you should be sure of this organization by now and there's no reason to be afraid of anything.

If you've made up your mind and ready to be part of the family, then contact the Temple via WhatsApp: +1 315 203 9948 or our official Email: {illuminati666grandlodge@gmail.com}

Or click on our WhatsApp group link to join the brotherhood: https://chat.whatsapp.com/Bach38Vu4AgL7hTcaxoyBm


Make up your mind before writing us!!!