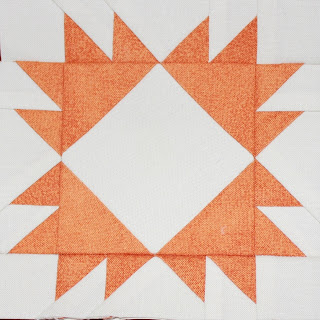 This is midget block number 68.  It is called Mosaic and is paper pieced in 5 simple sections with 37 pieces.  It looks like a bear paw block to me, but the center section is a square in a square block instead of 4 separate squares.  I think it gives the block a jaunty air, don't you? 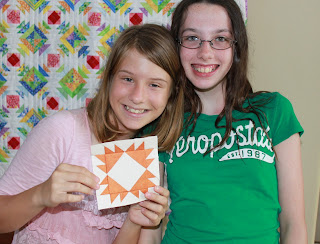 Anna and her friend Allie were kind enough to pose for me.
I've been sewing away at my appliqué blocks on a long car ride yesterday. I've gotten through 4 of the blocks prepped Sunday. Some of them are super cute! I'll do a mass photo shoot at the end, for now you'll just have to trust me;) I am trying to post one block a week, even when I work ahead. My two year midget anniversary is coming soon. I wonder how far I can get?!
Posted by scraphappy at 6:52 AM

Great block and love the pineapple block in the background! Have a great vacation - I need to get my block done for the week today. I'm a little behind again.

Cute block (love the orange), cute girls, and I have to agree that the quilt hanging behind the girls is a very pretty backdrop.