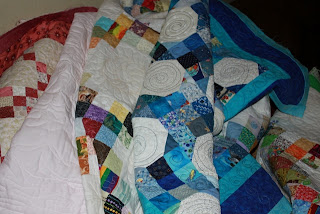 I have moved the stack of quilts waiting for binding to make room for Lego practice in the dining room.  It hasn't gotten much shorter since the Olympics ended though.  I was even tempted to try one of the small ones by machine.  I don't like the outcome or the process though, so it seems counterproductive.  I'll stitch a bit this evening, but honestly, I am using all of my mental energy avoiding school work.  Silly isn't it?  I could have finished off the stack of grading I brought home in the time I have spent avoiding it.  I've done much better this year at not having to bring home work all the time.  With a regular schedule this year instead of "extended day" which means teaching 6 out of 7 periods, I have time during the day to get work done.  I gave tests all day Thursday though which means lab notebooks and essays and with the first interim ending it all needs to be put in sooner rather than later.  I think I'll just dive in so that I can go to the inservice day tomorrow with a clear head.  I appreciated Amy's comment tonight that she was leaving school work at school.  I agree with her in principle, but catching up is going to win this time.  I did get a bit done on the Hawaii quilt, though more of it was cutting than sewing.   I'll be sure to put up an update for design wall Monday tomorrow.  Hope you all had a relaxing weekend and are ready to face a new week.

Posted by scraphappy at 9:15 PM

I honestly don't know how you manage it all! Working and kids and quilting, not to mention bloggin on top of all that - whew!!! Quilting alone keeps me pretty busy and I have to find time to add blogging to the mix :*)

I got a Sunset block made!!! I'll post pictures tomorrow on Design Wall Monday. Yoohoo!!! I'm loving it so much!

Congrats on getting what you did get done, done. I have spent the past few days painting.....almost finished today, and we ran out of paint. So we will go buy it tomorrow, and probably finish the painting on Tuesday. Hallelujah!

We do what we need to do sometimes :) Although the "leaving school at school" is a GOAL of mine, I can guarantee there will be times when that simply won't/can't happen. :)

It sounds like we both did more cutting than sewing on the Hawaii Sunset quilt! :) This one will truly be a lil' bit at a time; slow-but-surely to the finish line.

Bless your heart. I don't see how you get everything done.

Amy has a good point...and if you can manage that more time for sewing! SMILE!

you are a tease :-D
I am longing to see those quilts laid out properly now!

You were a wise woman to just get it done. I procratinated and paid for it today big time. Glad that you got some sewing in.

I have the same feeling about machine binding...just not as much fun! What a great pile of quilts...hope Lizzie doesn't find it and make it her new nest!!