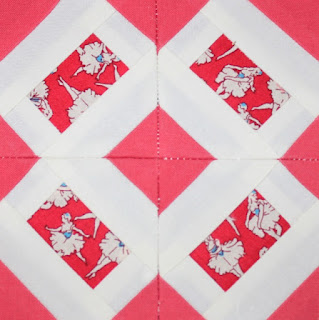 Do you ever look at old quilt blocks and wonder about the name.  I wonder why this one was called Old Mississippi.  Is there a new Mississippi somewhere?  This block was paper pieced in two sections, and except for trying to sew on of the sections on rotated, it went together pretty easily.  Though it looks symmetrical, the red corner parts are different sizes, so the orientation of the blocks does matter. 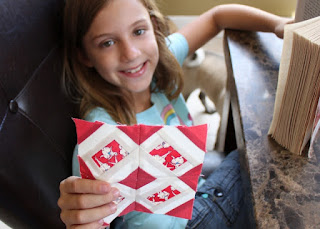 Sydney took a break from her reading to hold it up for me.  Isn't she a cutie?
I will spend the day digging myself out from being gone for the three day weekend.  It was so nice to get to visit with Mom for a while.  She seems to be doing just fine despite her recent medical trials.  While I was in Georgia we all finished off her Christmas shopping, cleared out a bunch of stuff for Goodwill and did the prep work for bunches of sewing that she wants to do for the Holidays.  A mountain of grading waits for me at school, I think today is the last day of the first half of the marking period which means I'b better get it all caught up sooner rather than later.  Fortunately it is only a three day week and since Monday is the most hectic day of the week right now, it should be smooth sailing until Thanksgiving.  Just two days next week means I'd better plan strategically to figure out what I can get in before the holiday.
Posted by scraphappy at 6:30 AM

That's a lovely block and, yes, Sydney is a cutie!

Great block.
I too am trying to think creatively as to how best use these last few days before Thanksgiving break. It's tough to do, knowing that every other teacher probably wants to assess before the long T-Day break too.

Cute! Both Sydney and the block :*) I'm getting ready for a holidays trip so I'm looking at being away from my quilting for a while and already dreading it!

Nice block! Pretty model. Such a sweet smile.
Christmas in 42 days! Where did the year go!

Such a cute block !

Smiles from NADINE in Belgium

Very cute! I do wonder about the names all the time. It seems some blocks have tons of different name.

Very cute block & model. I will have to find me something to do by hand (which I dislike) for days like this upcoming Monday when I have to sit in the DR off waiting for dear hubby to do his thing. Wonder if I have any cross stitch or embroidery projects laying around, can't find my crochet or knitting needles.......or what a mess.

I can not believe that Thanksgiving is next week already......whoa where has this year gone?