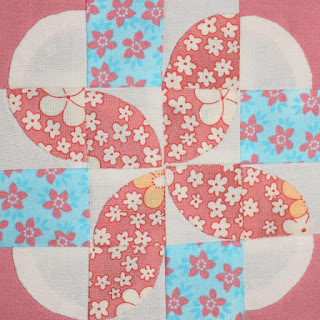 This is Midget Block number 81 which is called Windflower.  The applique bits were all ready to hand-sew during the first presidential debate. 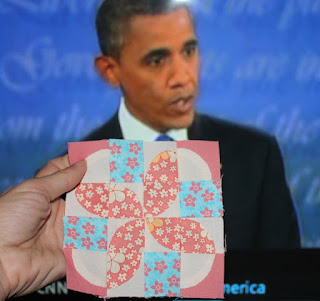 These posts are being scheduled ahead of time and I have enough Tuesdays planned so that this one won't come out until after the election.  Right now every one is going on about how well Romney did in the debate.   I wonder how it turned out?
Posted by scraphappy at 6:30 AM

Prep is the key! I guess we know how it all turned out now. Very cute block.

What a cute blocks and such a great photo of your tiny block with the President!

Very pretty, love the color combo you choose. Like your creative photography too!

Great job! So many pieces in that curve block!

So sweet of the president to do a photo with your block! LOL! Looks good!