Nothing feels quite as nice as finally being back home to stay after a long time away!  I thought I would end up getting lots of dishcloths done while I was away, but ended up losing one knitting needle fairly early on. I did finish two though, one on the trip up to Atlanta three weeks ago and the other on the trip back up on Friday after a trip to the store for another set of size 7 needles.  Most of the time in the hospital and hospice rooms were spent reading books on the kindle because it could be done in the dark.  I wasn't able to concentrate much and so reread a series of books that I had enjoyed years ago, it was a nice way to feel like I was doing something without having to think too much.
Mom's memorial service yesterday was very nice. I managed to get through my entire speech and my sister read a poem and a psalm. Brad, my older brother, didn't feel that he could do any public speaking, but he was there with us through the entire ceremony. There was a very nice video with photographs as well and Garth, the minister from the church, gave a very nice sermon which I thought did a perfect job of expressing Mom's personality.  I am so appreciative for all of your supportive e-mails and Facebook posts, I will respond to each of them in time, right now I'm still trying to digest everything that has gone on. 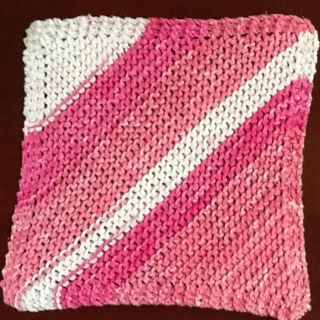 So here is the first dishcloth, which I made using a pattern that Sheila kindly sent to me. I'm going to paste it in here, because putting things in my blog is always a nice way of making sure they are easy to find later.  Sheila got it from Wanda, and I'm not sure where it came from before that.

The pattern I'm using is this one that Wanda Hanson ofExuberantcolor.blogspot.com emailed me. I love it. I copied and pasted itbelow. She uses it a lot. Me, too, now :DCast on 3 stitches.  Increase one stitch in each row by knitting in thefront and back of the center stitch until you have 7 stitches.Next rows:  Knit 3, yarn over, knit across.  This increases one stitch perrow and creates the holes that define the border.  Continue until you have45-50 stitches.  On size 7 needles I go to 50, with size 8 needles I stopat 45.Decrease rows:  Knit 2, knit 2 together, yarn over, Knit 2 together, knitacross.  Continue until you have 7 stitches left.Next row: Knit 3, knit 2 tog, knit across.Next row: Knit 2, knit 2 tog, knit across.Cut yarn with a 6” tail, slip needle out and slip a crochet hook in andpull the tail through remaining 5 stitches.  Split the yarn and pull onetail back through a stitch and then tie off.  Cut ends close.

Next time I make this pattern I am going to try to put a stockinette stitch in the center portion by alternating rows of knitting and pearling.  I think that would be cute too. 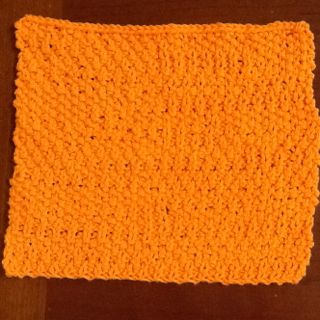 This one was actually made first, it is 40 stitches with the first row knit one purl one and the second row purl one knit one.  From time to time I got me rows mixed up, but I still like the knubbly texture.  I think it would look nice in the middle of the diagonal pattern as well.
Posted by scraphappy at 4:37 PM

Welcome home Angela! I can well imagine you sitting down in your favorite chair or on your favorite couch and just....Breathing! The pink cloth is lovely! I'll hold off learning to knit and stick with crochet for a bit :) Only one needle to keep track of that way :D

So glad to hear you are back home for a few weeks to regroup before the schedule of school takes over.
Happy Sunday

it sounds as though you have had a very trying time. i wish you strength and peace as you continue to heal from the pain.

i do like the texture in that last cloth. i have never learned how to knit but i can crochet (although i haven't done much of it for quite a while). whatever needlework one does, it's wonderful how therapeutic it can be.

So glad you are home and have some time to rest and recover from the stress and grief. It is hard to do much hand work in dark hospital rooms, so hopefully you will get lots of time for stitching now.
I want to try that pattern!

Welcome home Angela! I know it will be a long while before things seem "normal" to you, but it always helps to get to that first step of being back home in your own surroundings and doing your regular things. I'll be continuing to send hugs & blessings your way :*)

July has been that kind of month for me too - traveling and hospitals - and no sewing. Haven't even pulled out my aqua scraps! But hopefully August will be better and planning to make both colors to catch up.

Your dishcloths are wonderful! I'm finding that I can't make them fast enough for the people in my family who want them. They're fighting over them now LOL!!! Good thing I made a couple for myself before I ever offered to make some for the others, huh?

Prayers to you and your family.

Glad you are finally home.

You have been in my thoughts and prayers,

My thoughts and prayers are with you and your family. It is such a blessing that you were able to spend these last weeks with your mother.

It's good to hear that you are home, Angela. I love your dishcloths. Try to get some rest before school starts.

Sending good, positive thoughts to you and yours, always. You've got a strong, loving family who love you.

Your dish cloths are beauties! We use ours as washcloths.

Sounds like your Mom had much loving kindness with her end of life trials. My sincerest sympathies are extended and am praying for you all. Welcome home and just breath.....your dish clothes are lovely. Jane

I know it sounds so tired, but time does heal. I hope you can allow yourself time to recover, take good care of yourself and get "back to normal" when the time is right.

In the meantime, if you're looking for dishcloth patterns ... coincidentally, I just finished this one. I will probably tweak the pattern a bit and make another soon ... they are a little addictive, aren't they? I also want to make one of the knit on the diagonal ones like yours.

Hope you are getting used to your new normal and that things are settling down a bit after the chaos of the last few weeks.