Getting used to being back at home again is going to take some time.  Being is Costa Rica was so awesome!  It was so nice to get home again though and wash the smelly laundry and air out the boots.  Sleeping in air conditioning again is a real treat, but I do miss the morning call of the Howler Monkeys. 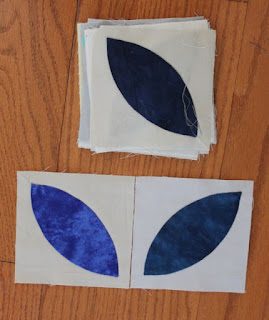 I did carry along my orange peels.  I worked on them during the flight down.   After that there was no way I was getting them out and risking exposure to mud and bugs and humidity.  I thought I had gotten quite a few done, but when I pulled them out to take a peek, there were only 2 and half finished blocks.  Slow and steady, wins the race.  We will have another car trip someday I am sure and they will get done eventually.  Others are also sharing their handwork at Kathy's Quilts, be sure to pop over and see what they are up to. 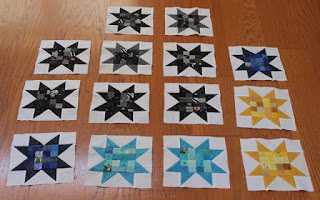 I had cut out a few more goose blocks to surround postage stamp blocks before I left.  Mostly black, but a few in dark blue an extra leftovers from earlier months.  I have 85 block now I think, which is more than enough for a twin quilt, but I will keep going and let the extras carry over for next year's quilt.  I think it will be the same block, but with crumb centers instead of the postage stamps.
Posted by scraphappy at 4:28 PM

I've enjoyed reading the daily accounts of your trip. Thank you for sharing.

Happy that you are back safe and sound : )

So glad to hear you are home safely. And so happy to see you working on seed blocks too.
Absolutely slow and steady wins the race!!

Welcome back. I'm sure the family is happy to see Mom again. I enjoyed reading your posts. Sounds like an awesome adventure.

I love the postage block centres on the saw tooth stars.

Glad you had an amazing time! Rest up a bit before school begins! These blocks look great!

Welcome back. It was fun to follow your trip!

Glad you made it home safely. Reintegration has probably been busy as you are back in school as well. Looks like you got in a bit of relaxing stitching before headed back to the classroom.

Glad you're home safely! Relax and take a while to rest up.