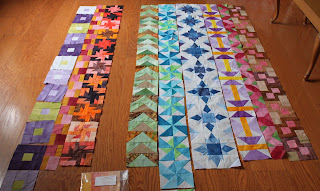 I've been procrastinating.  Part of it is that I'm not in much a quilting mode lately.  But part of it is that I just wasn't sure that I liked where this quilt was headed.  When I planned it last year, the goal was to minimize the use of background fabric and focus on color.  There are three blocks though, that have a significant amount of background fabric, and they seem to all be clustered together.  I think that spreading them out by rearranging the rows might help things out.  I also think that the original block that I had planned needs to have more background pattern. 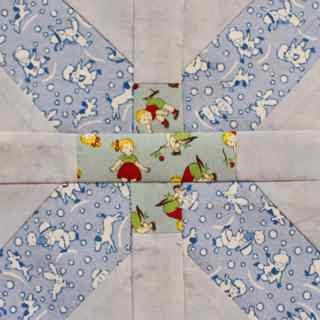 This was my original block plan.  I'm thinking now though, that it is too busy.  I'm working on a simpler version though, one that has some background fabric.  If I spread out the four rows with predominant background fabric, I think that will balance things better. 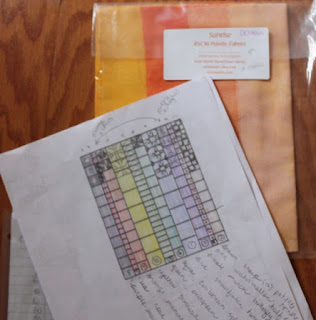 Here's my fabric, and my original plan. 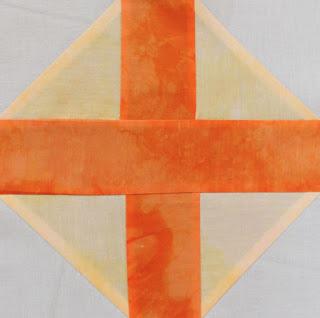 This is the new block I'm going to use instead.  It is a variation of a hopscotch block, or a variation of a shoofly.  I'm not sure if it has a name.  I'll work on the tutorial as soon as LAX is over (DH out of town again).  For now though, the corner units are 4 inch half square triangles, and the cross units are from  2.5 inch strips.  More to come.
Posted by scraphappy at 9:45 AM

Sometimes stepping back from a project is a good thing- I do it all the time!!

The quilter at Exuberant Color is working in a similar block - you might want to pop over to her blog.

I'm sure it's going to be a beautiful quilt when it's finished.
I think I might sash my columns with skinny strips of white. I always lay my blocks out and think of possible ways to sew them together, a creative process I enjoy.

It looks like you are using lots of hand dyed fabrics. I think I would shuffle them around wildly and not have set rows. But then, that is *my* style and it may not work for you.

The quilt is turning out lovely, but if you think it's too busy, you might try adding a 1/2 inch sashing between the rows. That would make each of them stand out. Just a suggestion!

it looks great! maybe add just a strip of fabric every once in a while.... oh and you NEED EQ7!! you'd have so much fun with it

Thanks for this post; I was very dissatisfied with my strips and I could see that one strip was missing. This will help. Thanks.