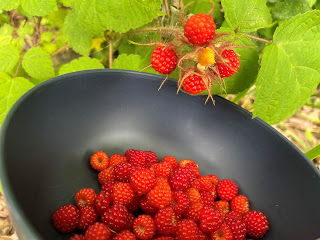 It has been a fun vacation week in the mountains.   Each day I go out and pick some of the local  Virginia Wineberries.  They are actually a nonnative invasive, but the berries are pretty tasty. 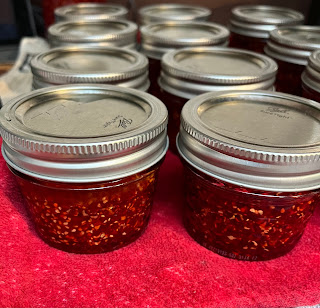 I had enough to make some jam.  I've never canned anything before, so that was fun.  I am not sure that I did it entirely correctly, but time will tell.   There were so many seeds!  Next time I will have to try a seedless version.   There are enough frozen berries thought to take home and try to make some wine.   That is something else that I have never tried. 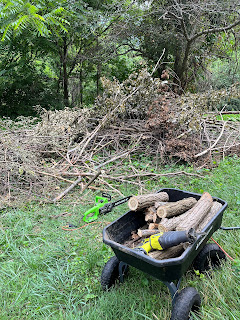 We are still trying to get the piles of lumber under control,  This one was practically gone until we went to clear just a few branches that were falling into the driveway. 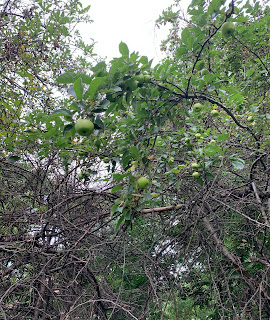 Last time we were here we cleared all sorts of vines and dead branches from a group of apple trees down at the base of the driveway.  We were pretty sure the trees were all dead.  We were shocked to find loads of apples growing happily on most of them. 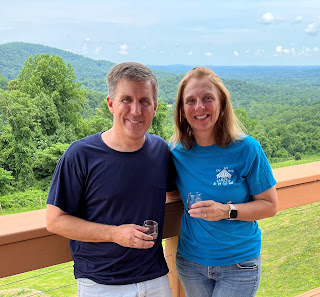 We also had plenty of time to go to a local winery though, so it hasn't been all work and no play.  We will head out bright and early in the morning.  I have a nice stack of hexies to keep me occupied when it isn't my turn to drive.   I will try to pick out the purple ones first!
Posted by scraphappy at 8:38 AM

Sounds like you're having some fun new experiences up in the mountains! Hope the jam is tasty and you enjoyed the wine, too!

for second week in a row it won't let me load a photo - something on my end I am sure as others are posting their photos Your jam looks great but yes a lot of seeds.

You guys look so happy! I guess all the outdoor work is good for you. Perhaps those are magic berries! :) Safe travels!

Lovely photo at the winery... cheers!
Congrats on becoming a jam maker!

Congratulations on finding a winery! Cheers! My daughter lives in the Alexandria VA area and visits all kinds of local wineries. When I'm visiting, we usually try to get one in because I just love the atmosphere, sitting outside listening to music with a glass in my hand. I'm not hooking up today because I haven't done any purple this week yet either. Have a great week!

What beautiful surroundings in that photo from the winery! Safe home, Angela.

Your jam is such a gorgeous color!

Great photo of you enjoying the local winery! Those berries remind me of raspberries. Do they taste similar? Look at all those apples! Soon you will be making apple pies!

Where in VA did you vacation? I live in Lexington, VA in Shenandoah Valley. Love wineberries. So glad you had a good vacation. Come again!
Mbbaker35@yahoo.com

We had a lot of wineberries in Pennsylvania. I never made jam from them (assuming enough made it into the house), but I did make delicious cobbler. Enjoy! Sandy at sewhigh.blogspot.com