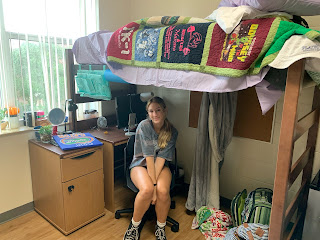 Sydney moved into her college dorm on Thursday.   We have officially moved out the last of the children.  What a strange feeling to have just the two of us rattling around the house together.  Good thing we still like each other! 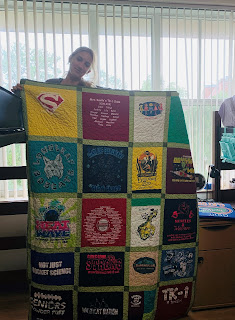 I did manage to finish the binding on her t-shirt quilt just in time.  She was very specific about which quilts to include and where to put them.   It starts with her daisy girl scout shirt and ends with senior powder puff.  So many memories! 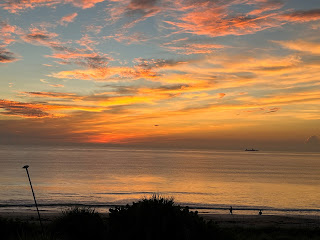 Work hasn't settled down quite yet, but it has been lots of fun learning how to do so many new things. It is a huge change to have time in the day to cross things off of the list rather than trying to get all the extras done while teaching all day.
The orange scraps have been waiting patiently for their turn.  So far I have stacks of nicely trimmed strips and squares along with a handful of partially assembled blocks.  I think I will get a little bit done this morning.  When Kurt gets back he is going to want to survey the disaster area that was Sydney's room.  It is going to be my new sewing studio, but some work needs to be done first.

Posted by scraphappy at 8:45 AM

Begining the day with this gorgeous sunrise is divine.
How cool organizing a new quilting room.
Have a great weekend, Angela

That's such a big time in the life of a family - bittersweet. Hope Sydney has a great year, and you and Kurt, too!

A beautiful orange sunrise - perfect way to start the day!

Congrats on your daughter's new quilt, it looks great. Good luck with all your transitions this year, at home and at school.

The “disaster area that was Sydney’s room” - haha! I so relate to that description of a bedroom! Somehow, as they grow older, they develop their own sense of order and pride in ownership. For the most part, LOL. This is a bittersweet time for you - enjoy all the emotions as you all begin a new stage of life! xo

Congrats on getting Syd's quilt done, Angela! The empty nest? I remember that feeling. I'm pretty sure I was doing a happy dance about only having to cook for two! Alas, ours didn't remain empty for very long. Hope you are having fun with those ORANGE scraps you prepared!

Give it a few weeks and the empty nest will feel normal. Good luck to your daughter as she starts college!

Perfect orange sunrise. Marvelous! Enjoy setting up your new sewing studio. It will be fun starting from fresh. ;^)

Rattling around was such a good descriptive word! I remember that time. We used to laugh at the amount of laundry we didn't do and that we actually had leftovers. . .after our kids moved out. They came back for a time and I didn't claim one bedroom for my studio until after that one was married.
It looks like she is happy with her space and her quilt. Enjoy the quiet!

Awwwww - I love her quilt, and have fun with the empty nesting!!!!!
She will do amazing!

Good morning!! I am also blogging with you.
ភ្នាល់បាល់អោយបានត្រឹមត្រូវ