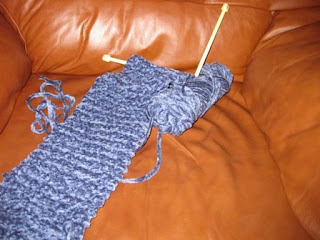 It's been bitterly cold here and I have not got much in the way of winter wear. I also needed something relaxing to do while hanging out on the couch and watching TV. I had some soft suedy blue chenile yarn that I found on sale at Joann last week and decided to turn it into a scarf. I think it will be quite cozy as I brave the freezing winter wind during my morning car loop duty. I've never been much a knitter, but I think I'm doing it right. My first try turned out about a foot wide, so I tore that out and tried for something narrower. I haven't got a pattern, but I'm going to keep going until it seems long enough and then maybe put a fringe on the ends. Sydney is already requesting one in pink, so maybe I'll let her pick out some yarn and whip one up for her as well. I know knitting socks is really popular right now, but I'd never put that much work into something that was meant to go on my feet.

First of all, knitting?! For once, we have something NOT in common! :0) Never learned it, nor have ambition to learn it.

Thinking of you, wondering if you are running cuz I don't know if the marathon is today (Saturday) or when.... If you're running, hopefully you'll make your 5 hour goal!!!!

And of course just as soon as you finish it the weather will be warm again.
LOL, I just had to scroll back up and tell you that the "word verification" is fixin. LOL, as in - I am fixin to put some grades in my grade book.