I was surprised when my mother-in-law wanted to go to a quilt show together, but I was happy to oblige! had so much fun looking at all of the beautiful patterns, colors and techniques. "Mom" seemed to be having a good time too, and asked questions about the different methods we were seeing. Before long she was able to tell the difference between the hand and machine quilted tops and separate the pieced blocks from the applique. She seemed drawn to the earth tones and didn't care for the "art" quilts at all, preferring the more traditional blocks. 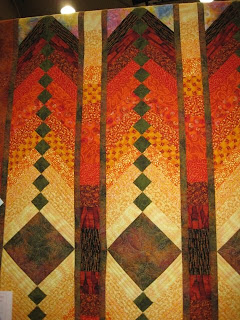 I found myself drawn to quilts with careful value placement that gave shaded effects. I liked the way the different yellows and golds made this quilt seem to glow. I think the green contrast adds nice movement and the reversal of the color placement in the sashing strips is a nice touch. It was quilted with lots of straight lines following the diagonal. 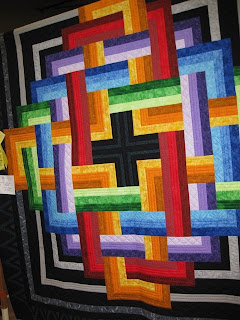 This one had fabulous quilting in each of the stripes and gave a cool woven effect. I keep thinking I'll try a bright and black quilt sometime, but I haven't gotten to it yet. 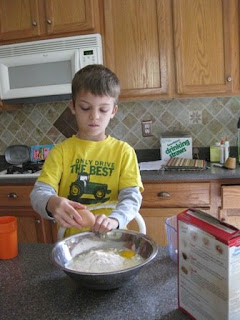 Ryan was anxious to have an OM practice today to begin preparing for the state competition, he even volunteered to make the snack and worked diligently on blueberry muffins for everyone. They got a little carried away with the spray paint today, but started working on a box city for their dinosaurs to demolish. 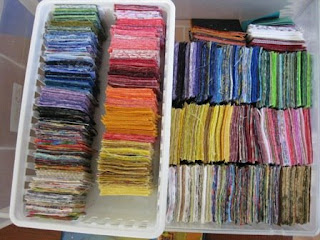 Last night I got busy organizing and putting away all of the scrap squares I've been producing lately. I've used lots of two inch squares, but I still seem to have more to spare. I went ahead and sorted everything into colors because I've got a leader ender thing going that's called crayon box. It's a 16 patch with a solid ring around a white center. I am thinking about alternating it with a yellow and green square of some sort to suggest a crayola carton. I made good progress on the Scrappy Irish Chain, but in the wee hours of the morning realized that I might have made a small math error causing me to make twice as many blocks as I need. I looked up the size of a standard twin quilt, and compared that to the finished block size to determine the number of columns and row. However, I think I forgot about the fact that their are two types of blocks, thus requiring only half as many of each. I think the mistake is still recoverable, as I only got about half done with the blocks. I can put the two halves back together and end up with about the right number. 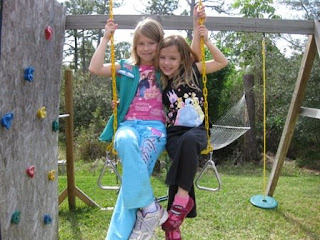 Anna and Sydney both came to cookie booths with me this morning and then wanted a picnic for lunch. I'm not sure how they managed to eat their lunch on the swing set, but they were having fun and playing well together, so I can't complain.
I was planning to stay up tonight and watch the academy awards while cutting some more scraps, but I 'm tuckered out from my late night. I think I'll curl up in bed and watch the arrivals until I fall asleep.

Posted by scraphappy at 7:12 PM