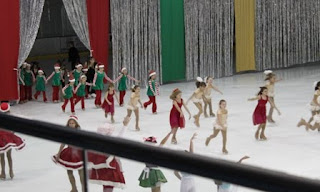 We all went to see Anna's ice skating performance last night. It was exactly like a dance recital except on skates. Each of the age groups had two numbers and then they all came out for the opening and the finale. Sydney was fast asleep before intermission and Ryan was pretty grumpy about having to sit there for so long. Reminding him about how many football games we all sat through for him didn't seem to add any perspective to the situation. 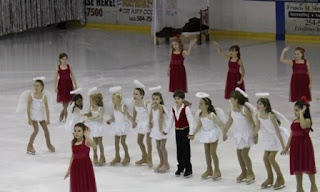 Kurt finally had the idea to let him take some pictures with the new camera and that finally cheered him up a bit.
Today I have been cleaning non stop in preparation for Christmas. Somehow everything just feels more festive to me when the house is tidy. I lost count on the laundry at about load number 8, but I can almost see the bottom of the hamper. I was planning on watching TV while all this folding and sorting was going on, but apparently the TV broke last night. Kurt took it all apart and figured out it was a bad color wheel. We pondered ordering the part and fixing it ourselves, but eventually realized that TVs have gotten a lot cheaper since we got our last set and it was going to make a lot more sense to just start fresh. So off he went to pick up a new TV while I watched Hulu on the laptop. Still no sewing going on, but I am still hopeful.
Posted by scraphappy at 7:36 PM

What fun to watch an ice skating show. We used to suffer (er, enjoy) music recitals, which seemed interminable.

They look like little angels. Sounds like life is happening at your house, lots of memories and laundry.