Not Quite a Quilt 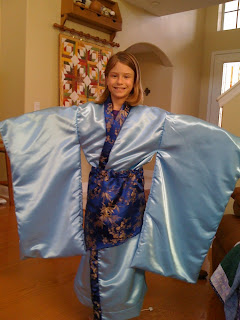 Anna is doing a school project called Holidays Around the World next week at school. She chose China to research and wanted a Kimono for her costume. We picked out the fabric and she cut out the pattern last weekend and today I sewed it all together for her. She's been at ice skating rehearsals almost daily lately so I'm glad she got an early start on this. If I were a really good mom we would have done all the sewing together, but I chose to just get it done instead. 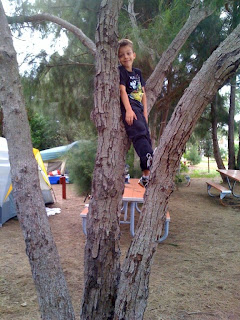 Kurt and Ryan were Cub Scout camping for the last two days and seemed to have a very good time despite quite a bit of rain. Apparently 8 year old boys think it is really cool to play badminton in a downpour.
We've been obsessed with the school rezoning thing lately, but I think have finally decided to give it up as a lost cause. I'm pretty sure things will turn out exactly the same despite all of the work we've put into it, and a couple of quotes in the local paper. I'm trying to just let it go, but it is easier said than done. I guess the momma bear in all of us gets riled up when somebody starts messing with our kids.
Just one more day of classes for my students before finals start on Tuesday. The main thing that means for me is that absolutely everything has to get done immediately. I'm starting to get all the loose ends tied up and am hoping to have a fairly relaxing time of it once exams actually start.
Santa is coming soon -- he is bringing Kurt and I a new camera so I'll be sure to post lots of pictures of our new family addition. I put my foot down for a long time about the whole puppy thing, but I am almost looking forward to it. Almost.
Posted by scraphappy at 3:03 PM

It looks great. I quilt because I can never get garments to fit so I'm impressed by anyone who can do it.

That is gorgoues, and I love the blue colour!
Micki