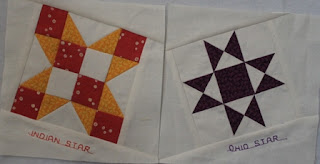 The plan all along has been to set the Midgets on an angle and embroider the names below.  I was working some projects through the machine today and thought I would do a little experimenting to see how it was going to look.

So after messing with the machine for way too long and finally calling the store where I got it so they could remind me how to program the letters, I stitched out the names for the first two blocks.  I wasn't sure I liked it, so I then ripped apart the first block which had a wonky "O" anyway and tried it by hand.  I'm not sure I like that either, but it might get better with practice.
It's too late to buy the next step up machine with the script font I have pictured in my head, so which one looks better, hand or machine?  I can't decide which one looks better, or even which one would be easier in the long run.  What do y'all think?

Posted by scraphappy at 4:27 PM

I love the blocks! I think I like the hand-done names the best.

**flipping coin in air**
I guess machine would get my vote simply for the ease????

BUT, I LOVE LOVE LOVE the idea of setting the blocks "wonky!"

I prefer the look of the hand stitching, but if you have lots of blocks to name, you might want to use your sewing machine.

I don't know anything about machine stitching letters, so I don't know which is easier. But I like the look of both ways, so go with whichever you like better.

I like the hand stitching, but the machine would be easier.

Like the others I prefer the look of the hand stitching, especially the Indian Star, but agree that using the machine would be far quicker, once you've got used to doing it.

Why not do some and some - as the spirit moves you ? It would give even more character.

I like the look of the hand-stitching better, but by all means, if it's easier to use the machine, go ahead.