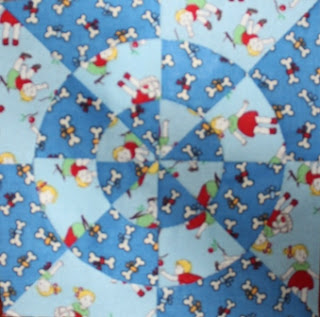 This is Midget Block 84. It is called Mill Wheel and is appliqued.  It is another one of the really cool blocks that uses two blocks that are pieced and then rotated before one is trimmed down and sewn on top of the other.  I did one with four patches earlier and a flower shape.  This one is pinwheels and a doughnut shape.  It has 24 pieces, though it started as only 16 before the layering. 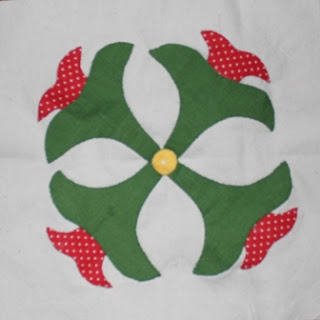 The next block was started several weeks ago but languished.  It is number nine from  the extra Midget Applique series.  It is called Flower #6, which is a distressing unoriginal name.  I think it should be called Honeysuckle.  It has 10 pieces. 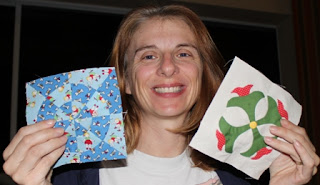 Posted by scraphappy at 6:35 AM

Love 'em! I have been checking out all of your midget blocks lately and I think I will be making some soon - I am quite excited about the project!

I looked at that first block in horror-- could you imagine doing that without using the applique method? Egads!

Love em both! I like your name for the second one!

They look lovely, but difficult! I think I'll watch you sew your way through the series :D

Those came out great. I agree with the above... your name is much better for the flower.

Honeysuckle sounds like a good name to me. I can't wait to see this beauty come together...really impressive!

What sweet little blocks! Flower #6 is a boring name.....go with Honeysuckle :)
Quilting by the River

It's your block to rename! Adore the fabrics of mill wheel. GREAT blocks!