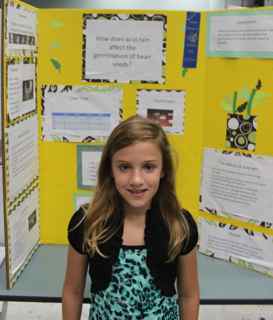 There has been something every night this week.  Usually two somethings.  One night there were three things, all in the same evening.  Kurt has been gone and I was really looking forward to curling up under a quilt on the couch.  A cold front just moved in, so a hot chocolate sounded like a definite possibility.  Instead we got a note home saying Sydney had won science fair and we were supposed to go to the awards ceremony.  Yeah!  Sydney won the science fair!  She will the the third grade representative for her school at the regional fair in the environmental category.  I'd be excited if  weren't so darned tired.
Posted by scraphappy at 7:34 PM

I hear you on the evening activities. This evening was the parent viewing of DT's school science fair projects since they had the judging today. Thankfully that was it for tonight.

Hope you got your hot chocolate eventually.

Enjoy the hectic life....they grow up way to fast and you will miss this craziness! A Mom who knows!

How wonderful. Congratulations to your daughter. Hugs....

That cold front is a dooZy. It dropped 10 degrees this morning on the 4 minute commute to work. You should have that tomorrow morning, or maybe tonight. Congrats to Sydney!!! I hope your not coming down with the flu bug. Keeping my fingers crossed you don't get it.