April Block in the Works 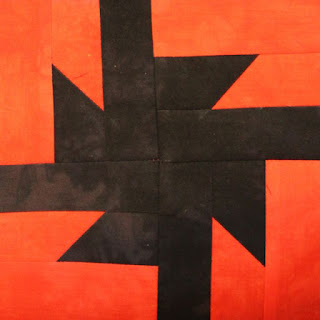 The April Sampler Block is done!  I fixed the measurements from the original tutorial.  All the photos are taken to write a new tutorial and I am taking my computer along to the conference.  Hopefully I will be able to write up the directions during the evenings.  I am envisioning half of these spinning one way and the other half spinning the other way so that the long pinwheels will stagger in the finished row.
So Kurt got back last night from a business trip. He was in DC for the week.  He knew that he had to come back early so that I could go to my conference, but I guess with him gone we didn't communicate about the details.  He was pretty sure I was supposed to pick up the kids after school today.  Hard to do when I'm in Orlando!  Then he wanted to know what time I would be back.  He looked awfully puzzled when I said Saturday.  He had no idea I was staying in a hotel during the conference and not commuting.  Big sigh.  Travel is hard on everyone I guess.  I am super excited though.  One of the keynote speeches is by Sir Ken Robinson.  I am really looking forward to it.

Posted by scraphappy at 8:32 AM

I hope the conference goes well. Family will make it until you come back! Take care!

love the block--have a ball at the conference!

Looking forward to finding out what size the April blocks will be. Enjoy the conference. I always looked forward to no cooking or cleaning for a few days. :)

I know you will enjoy the conference. I just finished a course on brain based education and it was great.......and the family will survive without you. They appreciate us a little more when they realize how much we do.

Those trips where there are hand offs can be tricky. Thankfully DT always knew who to call when one of us got the details mixed up. Hope the conference has been a good one.