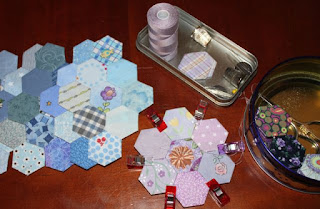 I've been thinking lately that I need a new handwork project.  Though hexies seem like an obvious choice, I wasn't sure where to go with them.  I planned out several fabulous medallions for later.  For now, I want something simple and discrete.  After much pondering and pinteresting, I decided on some 9 patch diamonds in the colors of the Rainbow Scrap Challenge. Check out this Simple Things blog post for and idea of where my diamond hexie blocks are headed.   There was a larger rainbow diamond block on pinterest that was tempting too, maybe next time.
On Sunday I dug out some light blue to put together my first diamonds during Victoria.   I'm enjoying this show as a replacement for Downton Abbey.  It is on in the same time slot on Sunday evening, which is a great time to settle in for stitching and TV viewing.
Before the speech last night I found enough fabric for 5 blocks of lavender.  Unfortunately, I couldn't start watching the speech until after the 9 pm robotics pickup up, and I was fast asleep on the couch before the second standing ovation.  Kurt has been out of town this week though, and I'll take advantage of the alone time after the kids have disappeared upstairs to sew a bit more.  Right after banana bread that is,  it is fresh from the oven and smells so good!  Hopefully I'll make it awake past 9:30 tonight.
Posted by scraphappy at 8:28 PM

You got a great start on your hexie project. Did you see the super moon and eclipse this morning? We didn't get to see the full eclipse, the clouds covered that up.

Thanks for the great link. Love all her hexi projects.

Hey Angela... excited to see how your diamonds project turns out... I like how she did some hexies with white outer ring then colorful path! Quite different from the traditional for sure ... with all her options... thanks for sharing that and enjoy that banana bread :D
Kathi

Love the links and that rainbow diamond quilt is awesome. I think it is time to pull mine out and see what I can do with them... somehow they need to get put together but they are hand pieced not EPP.
Hope your week goes smoothly - always difficult when one adult is away.

A lovely hexie project... so fun for hand stitching!

So pretty hexies! They are soft and lovely! You are inspiring me to get back to my Grandmother's Flower Garden!

Unknown said...
This comment has been removed by a blog administrator.
Friday, February 02, 2018

Looks like you are well organised for your hand stitching. Lovely fabrics.

I started making hexes this past year so I would have a take-along project, too. I have no plan for them whatsoever, but I'm sure inspiration will hit one of these days. They're kind of fun!

I've been enjoying Victoria, too! I love the sets and costumes and the acting has been quite good! I started making hexie flowers like yours, but after a while, I ended up starting just a big, random hexie panel. It's fun!