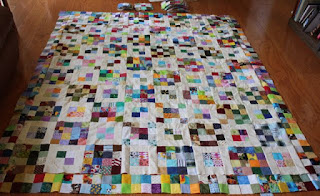 I thought I had cleaned up and organized everything at the new year.  Still, I keep finding extra blocks all around the sewing room.  Hiding in a stack leaders and enders were plenty of multi color four patches to finish off the borders for four squared.  It needs a good ironing and then I'll dig for some backing fabric. 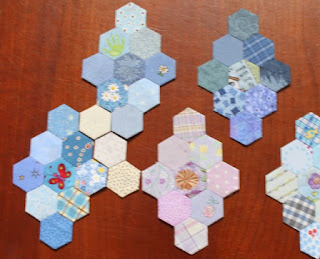 I've finally decided on a new handwork project.  These hexie diamonds are simple and small enough to carry along without too much thought or planning.  I had planned originally to border each block with white all the way around.  It is a lot of white though. 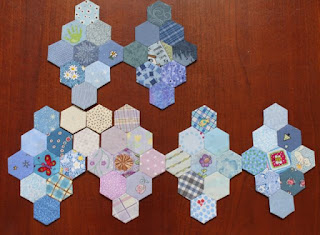 Now that I have finished a few, I think I might snug them together a bit more tightly.  I kind of like the little three hexie shape that forms between the blocks.  It might make a nice secondary pattern.  Plenty of time to figure that out though, isn't the long slow decision making process one of the best parts of handwork?
It is Superbowl Sunday and we have been invited to a party for later.  First though, there is time for puttering around the house with normal weekend chores.  Kurt has gone to drop Ryan off at robotics, and we ordered some groceries online for pickup.  One of the other teachers at school does her shopping that way and says it is a big time and money saver because you don't end up putting so many impulse snacks into the cart.  The online shopping part was certainly easy and quick.  We will see how the pickup goes.  It will be a busy week at school, but fortunately Kurt is home again.  He's had a lot of weeks out of town lately and it is always nice to have him back home again.
I've been watching The Tudors while I sew now that I've finished off The Crown and am up to date with Victoria.  It is a bit spicy and not something I would put on the big TV where the kids would see it.  Always interesting to watch a historically based show when you know the major plot points if not all the details.  Henry has already been through two wives and is just starting on number three.
I'm linking up with Oh Scrap! and with Slow Stitching Sunday.
Posted by scraphappy at 11:00 AM

I loved the Tudors when I watched it a few years ago :) I think it was you that mentioned Victoria before and I started watching that.

As to racy, the new season of the Crown surprised me there in the middle / whoa! :) And that was one that I thought would be safe for kids....I warned my DIL don't have the kids around when some of those episodes are on lol!

I love the pretty colors of your new hexie project! It's going to be fun to see them grow.

How nice that you found some blocks stashed away that will finish off your quilt top. I guess that cleaning things up can have a nice payoff.

When I came down with the Flu and then Clay, we started using HEB Grocery for Curbside service I tell you it has saved us from getting sick again and the time it saves is wonderful. I love it - I believe that the cost is $4.95 plus a little increase for the shopper. But if it costs me $10.00 to have someone go fight the crowds while the Flu is hanging around and the store is so busy that it takes an hour and a half to just shop and check out - I am in!!!!

Have a great Super Bowl Sunday!

You reminded me that I have an EPP diamond project somewhere. I should dig that out and work on it. I love the soft colors in YourS. Thanks for sharing with Oh Scrap!

The hexies are a good hand work project for traveling or sitting somewhere waiting. I have a EPP patchwork of the crosses project going right now for my handwork. But I haven't have much opportunity to work on them lately. However, they are sitting on the coffee table ready to work on during the super bowl.

Congrats! on finishing up the Four Square quilt top. TONS of Slow Stitching there to keep you busy for quite some time!!

Hexies are good to slow stitching anywhere.
Have a great week Angela.

Pretty hexies and I love the 3 little ones to connect them. Thanks for the tips on Netflix watching...I started Alias Grace today but not something I'd watch with the kids in the room.

My daughter uses an online grocery program and loves it. She says it saves her money and time. I may try it myself, one of these days.

The secondary pattern with three hexes is nice and the neutral is perfect. I think white would be too stark. We're all caught up on "The Crown" and "Victoria", too. The perfect shows for hand-stitching!