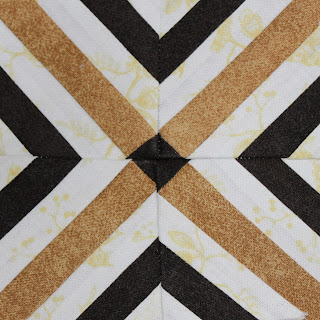 This is Midget Block #59, it is called Chrysanthemum.  It is paper pieced in 8 sections and was simplified so that it only has 24 pieces.  The original pattern had random extra seams in the light stripes and extra corners of white fabric at the end of the medium stripes.  I left those out for a simpler looking block without quite so much bulk. 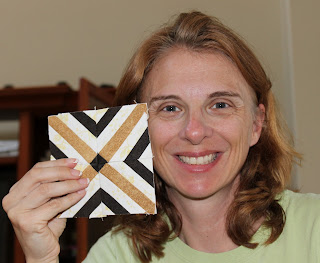 The pattern didn't quite work out as it was printed.  The little dark triangles in the center were both part of only two sections instead of being divided evenly onto each of four corners.  I sewed it as printed, thinking I just be missing something and it would all come together in the end, but it didn't.  I had to unsew the sections to add matching dark triangles so that the two halves would be symmetrical.  It is still a little wonky where I undid things, but in the grand scheme of things, I don't think it is too bad.
Most importantly, all of the first 60 blocks are officially done now!  I think my block count is at about 84 in total, including the applique and hand piecing that I did out of order on trips.  I never would have guessed when I accidentally stumbled on these blocks a year and a half ago that I would still be plugging away at them all this time later.  I hope that I don't get to the end of the published blocks before more are released.  I'd have to start making things up at that point to finish off the quilt.  I guess I could put in Dear Jane blocks to fill out the set, but it wouldn't be the same at all. I also have an applique CD from a book that I could re size to work with these fellows.  Time will tell I suppose.
Posted by scraphappy at 6:31 AM

Great block. We could get creative with sashing and extra blocks. Hopefully she'll post more this year.

I'm so impressed with your 'stickability' with these blocks. It's going to look great once you get to a finish.

Great job! And woo hoo on how many blocks you have done!