I had a little bit of time on Saturday to whip up these blue string blocks.  Kurt was nice enough to take Ryan to FAMAT so that I could stay home. These are 4.5 inch blocks with a 1.25 inch black strip in the center.  I really like the contrast that the black adds.  It will look great with the pink scraps this month.  Best of all, it is now time to put away the blue and pull out the new color!  I made quite a large dent in the scraps, though there are still a few odds and ends to save for later. 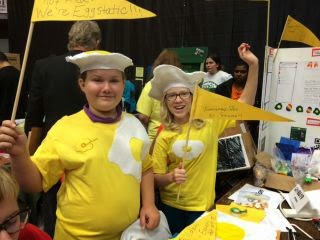 It was great to enjoy a little bit of down time on Saturday, because Sunday was all about the Regional Tournament for Legos.  We had one sick team member, and had to scramble things around a bit, but it was quite a fun day anyway. 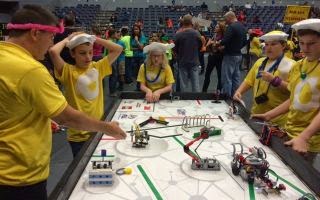 And to top it all off, we earned a bid to the state tournament!  So now we get to keep going and going all the way to March!  We made it home in time to watch the half time show for the Superbowl and then everyone was asleep before the end of the third quarter.  It seemed like a really exciting game, but we were all just really tired out!  The next three weeks will be extra busy with science fair, but after that, maybe it will slow down again?  Maybe:)
Posted by scraphappy at 7:56 PM

I love the small string blocks. I am doing some bigger ones and I used gray where you used black. I also spent my Saturday at a FIRST robotics tournament where our team qualified for the next level, in our case the east coast super regional FTC competition. I coached FLL for 4 years and I still have that lovely table in my basement. It is a fantastic program. Thanks for sharing.

You are one busy lady! I love those little string blicks. You are so right about the black making them pop. Can't wait to see the pinks.

Oh my I love the string blocks. And wow the black looks amazing!

The string blocks are going to be fun to put together. Keep your strength up. Take care of yourself

Glad you got some sew time...the blocks look great and those legos look fun too.

Had to scramble... love that along with the egg shirts.
Congrats to your team.
Hugs

That last few min of that game were killer! So EGGCITED for the boys!

Congrats on moving to the state level! My daughter participated in a robotics team for a couple of years several years ago. It was fun. Sadly the program was cut from her school. I love love love your string blocks!

Congrats on the win! Love the string blocks.....Hmmm must not start anything new! Hope you have a nice week and can get a little relaxing sewing in.

Congrats on the Legos success!

Science fair is coming up for us too. Drama Teen needs to get her board all finished.