Some quilts almost make themselves.  Not the sewing part of course, but at least the deciding part. 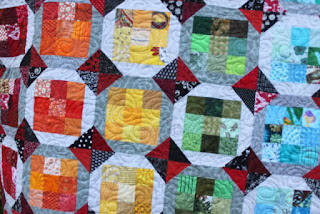 I had some extra nine patches leftover from another Rainbow Scrap Challenge project. 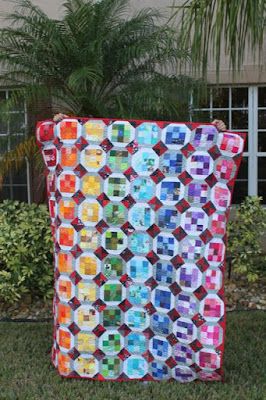 I saw an inspiration quilt, but the colors were all wrong, and of course, there was not a tutorial.  I'm not sure of the original block size, but I had 2 inch squares sewing into nine patches.  Those were framed out with 1.5 inch strips.  2.5 inch squares seemed to work for the flip and sew corners.  It didn't take much math before, the pattern was ready to go.  Given the rainbow assortment of blocks, neutrals seemed like the best way to go, so into the stash I went for extra bits of grey, red and black.  Before long, rainbow rows of color started to come together, one each month as the year moved along. 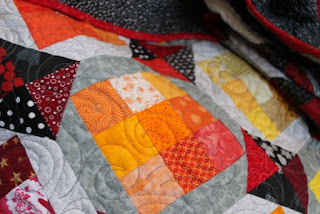 No borders made the finishing fast.  Extra yardage in red and black were framed out for the back.  Simple swirly pattern in grey thread for quilting gave texture without taking away from the colors.

Posted by scraphappy at 8:41 AM

This quilt is a beautiful example of scrappy fun.

I love scrappy quilts and the rainbow design is perfect!

Stunning! The quilting is a perfect choice, too.

Awesome, love all the brightness!

this one just turned out AWESOME! I love it

Joining the chorus - I love it, too!

Congrats! on your newly completed quilt. I'm looking forward to using some of the blocks that I've made in this year's Rainbow Scrap Challenge. Now, if only my work schedule will align with that goal...

Love the quilting pattern. This came out great - so fun to see all those scraps turn into such pretty quilts. No school today?

ITs beautiful, Love it!

It's a great example of a scrappy quilt that works!

Truly a great scrappy quilt. Love hearing how it all came together.

Congratulations on a wonderful finish! So colorful and happy!

I love love LOVE this quilt! Don’t you love it when our stashes give us a bonus?!? I am gathering ideas for blocks from scraps for 2016, and this just went on the list. Plus I can’t wait to see what you and Vicki have up your sleeves...

What a beauty of a scrap quilt - love the way you framed and flipped!

Just lovely. So nice when it just seems to fall together so easily.

It looks fabulous without a border!

it is fantastic! The colors really glow!!

I think that your quilt is verry nice with all this colurs.

It is another beauty!

Your quilt is wonderful!

It certainly looks more like a "main course" quilt than one made from "left overs". Beautifully done!