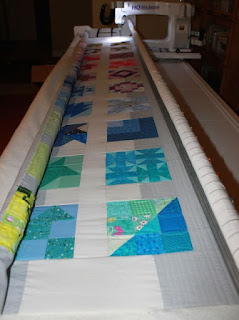 Hawaii Sunset was done, leaving the frame open and ready.  It didn't take too long to load the Rainbow Scrap Challenge Sampler of 2014 onto the frame.  The grey stripes are going to have horizontal quilting lines and the white stripes will have vertical.  Then each of the block will get some little bit of individual attention. 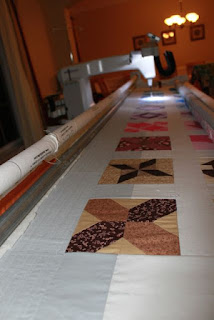 Once it was loaded, I had to quilt a few lines, just to make sure that everything was working as it should.  There was a work social after school today or I would have gotten further, but tomorrow is the last day of exams, so finishing this one up shouldn't take too long once the working thing isn't taking up most of my days.  I actually abandoned my AP class today to go to the dentist before our insurance ends tomorrow.  The new coverage won't start until February which would have totally messed up my winter and summer rotation.  The kids weren't due until January, so I pushed them off to the other end, the orthodontist says we will just redo all the math once the new policy is in place.  So many funny things you never think about when planning a job change.
Posted by scraphappy at 10:50 PM

oooo, I love your quilting plan! Looking forward to it coming off the frame, I know - you too!

You may be able to apply for COBRA coverage until your new insurance kicks in. Its basically a continuation of your current coverage for up to six months after you leave your current job. I believe federal law requires companies to offer this, so check with your HR peeps.

When I have a time crunch and a quilt ready to go I also try to get everything loaded and set up so that when time allows I can just 'get to it'. The problem is that I start getting excited and I want to just dive in to the quilting.

I really like your quilting plan for this quilt!