Some days I move faster than others,  Today I am moving like syrup on a cold day. 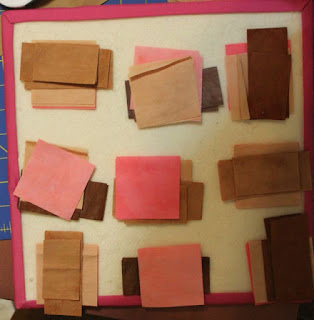 I set up a little assembly line yesterday and got all of the pieces ready to go for patience corners.  We ended up having to run around most of the day, and a little fabric cutting was all I could manage.
So Sydney now has some new Ikea drawers for her closet, and Kurt got his car back from the dealer in Orlando and I have some antibiotics that the doctor says should help me feel better any day now.  After all that running, hanging out on the couch last night was a top priority. 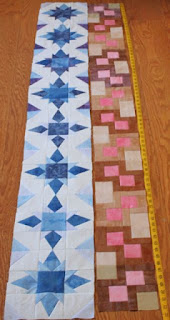 This morning though, I was able to sew together the February column along blocks. I decided to just put pink in two of the squares and use light brown for the corners.  I think it adds nice motion to the blocks.  I was surprised when I laid the blocks out next to the January blocks to find that they were not the same length!  I had to go and dig out a tape measure to find out that January was too long by 1.5 inches and February was too short by .5 inches.  I will work on making all the math add up later I suppose.  Ideally, all the rows should be 72.5 inches unfinished. 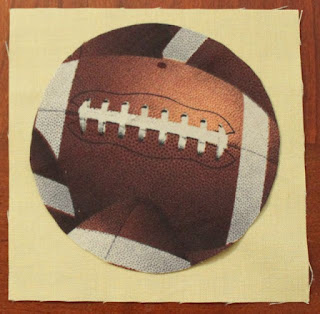 While playing with the browns, I was happy to find this football fabric in honor of super bowl Sunday.  Maybe I will stitch it down during the game.  We are supposed to go to a party, but I am thinking of letting Kurt go without me.  I'm sure he wouldn't mind. 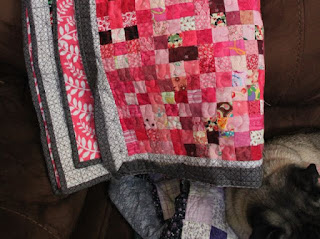 That would give me some extra time to finally finish the binding on my postage stamps.  I thought it would get finished up during Lacrosse on Monday, but not quite.  Then it was so cold on Friday that I went to a nearby mall and hid in a restaurant eating fries until practice was over.  Poor Sydney said she could hardly hold the stick because her hands were numb. 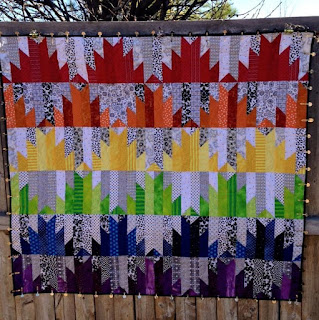 Check out this photo I got yesterday from Jill who does not have a blog.  She made it for last year's Rainbow Scrap Challenge.  Isn't it fabulous?  I really love the look of the black and white prints with the rainbow brights.  It looks like she is also on the binding phase.  Hope she is enjoying some slow stitching too on this Superbowl Sunday.  Be sure to visit Kathy for more slow stitching and Cindy for Oh Scrap!

Posted by scraphappy at 5:35 PM

Sorry to hear you're not feeling well. Get better quickly! Jill did a fantastic job on her rainbow mountains! Enjoy your relaxing afternoon...

The rainbow mountains are lovely. I'm amazed that I don't see a pattern for a while and then several show up at once. Go figure. Get well soon. Nothing worse than going to work when you're not feeling 100%.

I hope the antibiotics do the trick and you start feeling better.
Those rainbow mountains really glow against the black and white. Tell Jill I love it!

Angela, take care and feel better soon. I love the February column, it has a modern look. What a pity about the 2 columns are not the same size. Hope you figure out soon what happened and can find a a solution. Jill did a great job with the rainbow mountains.

Makes me want to take a trip to Rainbow Mountain... it's FABULOUS!!!

Thank you for showing the alternate coloring on the brown blocks! I like the pink in the middle with the neutral on the outside! I haven't cut mine out yet, I think I'll make that adjustment!

Love the look of the Rainbow Sampler blocks together so far!

Hope you are feeling better soon. DT has been watching the superbowl, for the commercials. Hope you got some stitching in this evening.

I started work on my patience blocks today. They sure go together quickly. Thanks for sharing your blocks with Oh Scrap! Get well!!

hope ypu are feeling a lot better now. Your rows are good wondering where I find this pattern, the delectable mountains is so colourful

We are so done with this winter, aren't we?! The blocks are beautiful but the difference in length is a conundrum!

Hope the antibiotics do the trick / there's some lovely blocks here and yes I like her quilt! :)

Hope you are feeling well soon.
My star blocks turned out a bit smaller than they should have ... so my two columns lengths will probably be the same.

Looks like you are having fun with these rows... Hope you are feeling better