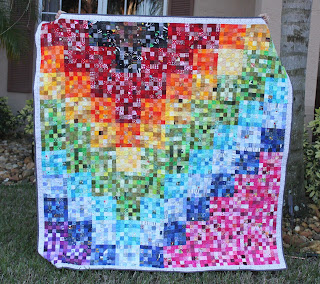 I'm thinking of calling this one Via Airmail.  It is made of the leftover postage stamp blocks from projects of the past.  Postage stamp blocks are so versatile.  The binding was finished during the Superbowl on Sunday, but today is the first day I've been home during daylight.  It was an early release day, so Lacrosse practice was done by 4:30.  Robotics started at 5:30, but Kurt took Ryan down and is picking up Chinese food on the way home.  Yum!  The hard part will be making sure that someone stays awake long enough to pick him up again at 10.  Yikes! 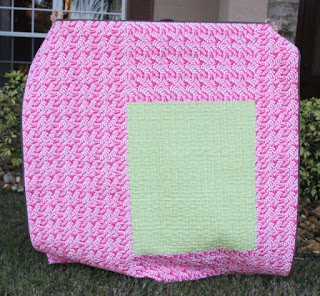 The back comes from some pink and green flannel leftovers.  I think the pink  was on clearance, and the green was part of a baby quilt perhaps?  I've grown really fond of the frame square backing.  It almost looks preplanned, but makes good use of relatively random amounts of two fabrics. 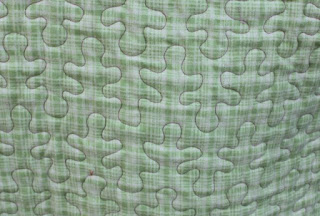 Finally, here is a shot of the quilting.  It is a pantograph!  That is two in a row.  Such a departure from my usual freeform style.  Just two more days until Science Fair.  I'm trying to help Anna assemble her board in between typing this, so forgive me if the sentences seem fragmented.

Posted by scraphappy at 6:30 PM

this quilt is just fabulous!

It's a fantastic finish! Congrats!

I love love love this quilt! Are they 2" squares?

Beautiful! So cheerful and fun!

what a good use of left overs. Thought at first lacrosse was 4.30 am but realised no it as late afternoon!

Stunning quilt and the quilting needed to be simple or it would have just been swallowed up in all the color! Nice work!

Your selection of lights and darks within each block really makes the quilt sparkle! Hope Ryan's "Build Season" is going well. Not much time remaining!

I love the way you've set your postage stamps! And the name is perfect!

Boy you are SuperWoman! So many projects - and what a beautiful finish! Thanks for tip on the backing - using two fabrics that way.

The name is quite clever, and I do love your blocks!

Great finish...it really is a wonderful use of your postage stamps.

Via Airmail turned out beautifully. I love the setting.