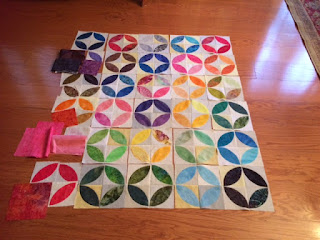 I've been puttering around the house all week not accomplishing much.  I thought it would be nice to finish some things off though.  These orange peel blocks have been hanging around mostly done for a while now.  Today I finished trimming away the background fabric behind the applique and trimmed the blocks all down to size before squaring them up and sewing them into groups of four.  I had no idea how many block there were until everything was sewn together.  Now I can see that I need eight more blocks to have enough for a small throw quilt.  Somewhere I have the templates still I think.  If not, I can make another from the finished block.  It shouldn't take too long to make that happen.
Ryan is volunteering at science camp again this week.  Anna has three shifts at the hospital to keep her out of trouble.  Poor Sydney doesn't have much on her plate though.  She is taking great pride in sleeping until lunch and staying up until all hours of the night.  School is just around the corner.  We'll have to get her back into routine before then.

Posted by scraphappy at 8:05 PM

What a happy looking quilt

Some weeks are like that. You putter and think and then a sudden burst of energy and so much gets done. Your orange peels are so bright and will be a lovely quilt.

Very pretty! It is that kind of week for me, too...one of trying to finish things up!

That is SEW pretty!! Makes me want to head upstairs and dig out my own template to start my own Slow Stitched quilt.

Very cute quilt - love how these get arranged into circles.

I know that "dog days of summer" come later, but for teachers the end of July really marks the end of our summer break. Enjoy while you can!

Love the quilt - So fun to get something that has been in progress for awhile to the completed stage.

So pretty... makes me want to get my blocks out and make some progress!!

Sounds like the kids have their summer planned. I don't know how kids sleep until noon. I never could do that but I had some who could! You have done a great job on your orange peel. You just might get that one finished soon!

Love the orange peel blocks, they are so colorful.

I used to love staying up till midnight and sleeping in until lunch! Enjoy the free time to sew before the hustle of school starts again.