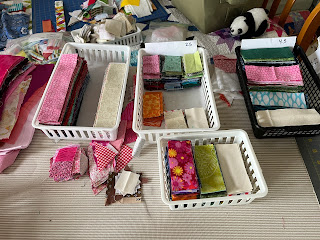 I was so busy sewing up more log cabin blocks that I was afraid I might run short of logs.   There is something so calming about trimming random scraps into nicely organized pieces ready to be used in blocks.  I should be good for a while now!  No photos the of the log cabin quilt progress because I filled both walls and started collecting blocks into groups of 10.  I need more than 200 blocks for the quilt that I want to make, so I will just keep plugging along. 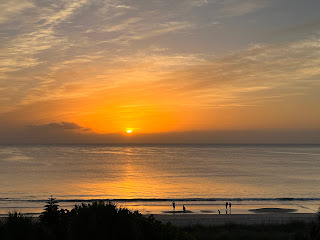 It is actually turning into a busy weekend.   A friend and her husband met us at date night last night to catch up and unwind before the end of the school year.   We are meeting an old school friend tonight for the symphony AND the school musical is this weekend so we will catch the matinee performance of that before heading to dinner before the music starts.   School is so crazy right now with end of the year festivities.   The kids are so appreciative of having all the old traditions back again.  Covid has taken a bit of a spike again, but nothing like the two earlier peaks this year, and so we keep moving forward.   Things seem to be on track with the new house after a bit of a hiccup over the septic inspection.   It should all work out in the end.   The closing is scheduled for April 29, assuming of course the sewage system is fully functional by then.
Posted by scraphappy at 9:02 AM

Enjoy your busy weekend, Angela! I'll keep check back to see if/when you add a title to your post so that I can add a direct link into my own. Best of luck with the septic system of the new house and an uneventful closing!

Things do get crazy as it gets closer to the end of the school year! Enjoy all the activities, and wishing you a little trimming/sewing time whenever you need it!

hope all goes well with the house inspections - the quilt I linked to was one of my RSC quilts from last year - binding done!

Good luck with the closing!

I love pinks I am finding out after using several shades in quilts lately.

Your log cabin strips look amazing all organised in their baskets!

There is something so satisfying about taming the scraps!