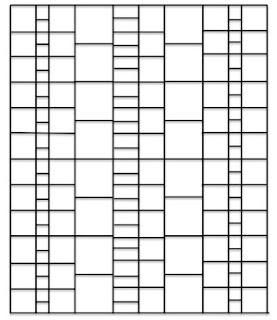 Looking for a new rainbow themed quilt for the new year?
For the 2016 Rainbow Scrap Challenge, I will be designing a column-along quilt.  What is a column-along quilt you might ask?  It is just like a row by row quilt, but when I did the math, mine just worked out better vertically than horizontally.  I think it gives the quilt a "modern" flair.  Then again, modern isn't my thing, so maybe I'm just imagining things.
Each of the 10 columns will feature a block between 3 and 9 inches in finished size.  All blocks will be traditional pieced blocks!  The 9 inch blocks will be a bit more complicated than the 3 inch blocks, so don't worry about the size range.  At the beginning of each month I will post a new block tutorial and let you know how many to make for the twin sized 60 by 72) or couch size (60 by 60) version of the quilt. Just follow along using the colors of the month and you will be ready to sew your rows together before the end of the year.
As always, feel free to change things up along the way and make them your own.  It won't hurt my feelings if you decide that you don't like orange or prefer to simplify or substitute a block along the way.  You could even do your own math and add more rows to make a larger quilt if you like.  The choices are limitless!
There are no fabric requirements for the blocks themselves, as I encourage you to use your scraps.  I will be using a bundle of 10 hand dyed fabric palates from Vicki Welsh, with 4 fat quarters per bundle.  I am sure that will be more than enough.  If you want to use a consistent background fabric though, I calculated out the math and 3 yards should be plenty.  Mine is going to be solid parchment from Connecting Threads.  It is a very light grey, less stark than white and a little different from ivory for a nice change of pace.

Sounds great! Can't wait to see the rows completed. I hope to actually MAKE this one!

I'm already looking forward to RSC16 and your "Column Along" quilt sounds like an interesting idea. Can't WAIT to see it come together!!

I would like to play. This will be my first. I have been looking at RSC14 and 15 to try and understand how this works...I think I've got it. Looking forward to 2016.

This could be great fun. Thanks for the time you spend every year on this project. I'm sure you have many other things you could be doing. =)

I am joining you. /this will be my first column along. Have 4 row by row quilts ready to be put together. Looking forward to 2016!

I'm planning to get back into the RSC in 2016 Angela - so delighted to drop in and find that you are continuing! It is always one of my favorite sew-alongs, and I missed it terribly in 2015. Love the column idea - should be fun!

I am in and I talked my mom into doing one also!

I'm "in" again this year and love this first block. Thanks for doing the PDF with the instructions. Very easy to follow.

I've watched many others make beautiful quilts from your scrap play. I'm a fan of the column layout and different sized blocks so am joining too. Thanks for doing all the MATH--my least favorite part!
P.S. The transcription editor in me wishes to point out that a palate is the roof of your mouth, but a palette is a color range :)

Great site! Love your work!!! It seems a wonderful sampler idea to me. Of course I'm in! Thanks!!!

Ok I'm a little confused...are we making 1 block each month or several blocks/same pattern each month....I did 1 block for January but do I need to make more of the same January block....thanks!!������

Can't wait until I learn February block pattern. I have all my brown/pinks ready to go.

I have missed something? Where is the February block? I know the colors, but not the block.

okay I give where is February please

I can't seem to get the pattern for March to open

im very confused. so where are snowflake, sheep, crocus?????

Hi,
I've stumbled onto your place. Thought I would like to join in. I don't do pieced blocks, I do needle turn applique, and was wondering if I could sub my applique blocks for the pieced ones. I've got all the colors wrote down and am hoping to catch up. I'll still be doing them in columns. Thanks so much for putting this together. Have a great day! I've already posted about joining you for this challenge. You can see my post here.......http://100sweets.blogspot.com/2016/04/scavenger-hunt-sunday.html

Have a great day!

somehow i have missed the April block and its now May where do i find it?????

i missed april also. did i blink? tx.

Just love your BOM. I see the May post for the block but I'm unable to access it. Any suggestions? Or am I jumping the gun and need to wait a couple days? Thanks so much!

Hi Angela,
Thank you for sharing all your bright & beautiful designs. Your quilts make me happy just looking at them.
I am unable to download your pdf for April or May. I'm a computer klutz & can't work out if it's me or the files not working. Help Please????
Thank you
Warm regards
Pam

I have the downloads for the first three months. I cannot download the block for April or May. Can you please help me with this problem. Thank you

Marg Goar, try clicking on the title of the block and not where it says pdf.

Where can I find the pattern for the month Juni?? I cant find it.

I'm having the same problem, able to see the name of the June block but the link is not clickable. :(

Where can I find the pattern for August?? Can you help me??