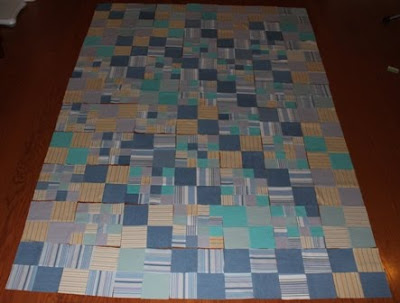 I just finished off the blocks for my Goodwill shirt quilt. I used the highly scientific method of cutting the shirts into strips and then sewing them together until I was out of shirts. I was alternating sixteen patches with four patches until I ran out and then I finished off with the four patches around the edges. I may have enough left in the scrap basket for some sort of border, but it seems to be about the right size now. The blocks are 8.5 unfinished and it looks like they are set 7 by 10. Now that I think about it, a border would make it nicely twin sized. I'll have to see what I can find. It is called square root because it is made of 16 and 4 patches. It was going to be perfect squares, but using the word "perfect" seems to be a little ostentatious. I'll move the blocks around a bit to even out the color placement and then get it up and pinned so I can sew the blocks together in the morning. I'm waiting for Kurt to get home from the airport now, so I'll putter around until he gets here. I'm thinking of quilting it with pink thread in a free motion water pattern. Again, the highly scientific reason is that I'd like to try it out and I have a cone of pink thread.
I took Sydney and Ryan both to get haircuts today and we played board games in the afternoon. They both wanted to sleep in the toy room and Lizzie has been snoring in a pile of fabric I pulled out to iron and put down in my chair. I'm working my way slowly through the stuff from the study. It is nice to have summer to be able to get things like that done.
Posted by scraphappy at 10:47 PM

Love it! Very interesting layout and my eyes just kept wandering all around the quilt top.