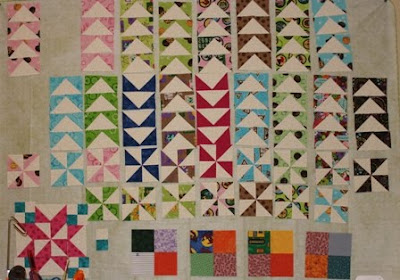 OK, first let me say that for those who are aware of my recent difficulties knowing what day it is, I looked it up and today is Monday June 14. I double checked and I'm almost sure I'm right. I have finished step 1 and 2 of Judy's June Mystery on Friday, so that was still up on my wall this morning. Today was spent catching up on ironing of recent fabric acquisitions and leader and ender squares. 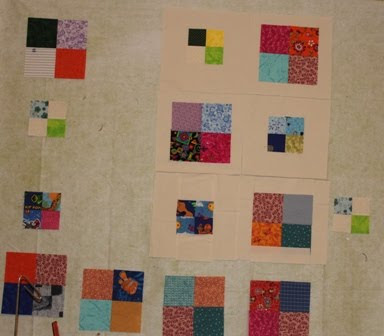 I spent a good deal of time this weekend cleaning and organizing in the laundry and quilting rooms. One of the things I found was a box of random 4 inch squares. 4 inches, what could I use those for? I guess they could be cut down and fed into the 2 inch box, but looking for more quick finishes to practice quilting, I decided to just throw them together into four patches and see how far they would go. I don't think it is enough for an entire top, so I was thinking of sashing them to a standard size of 10.5 inches and then filling in with other sized four patches sashed to the same size. I threw some up on the wall with 2.5 inch base squares, but I have other sizes I could use as well. I think it will come together quickly and give me a good opportunity to use up some oddly sized squares that have been aging for a while. What do you think?

Be sure to check out other people's design walls on Judy's blog. It is fun to see what other people are creating.


Today was actually pretty calm. The girls had swim team this morning and then Ryan got dropped off at Cub Scout camp. I had the rest of the day unplanned until ice skating make-ups at 5. It seemed like a good opportunity to get something significant done, but I was feeling headachey and sluggish today. I think I'll watch a little TV tonight and stitch down some binding. Christmas Lights has jumped to the front of the line because the orphan binding that I have been collecting together for Four Square seems to have disappeared. That was part of the motivation for the cleaning and organizing this weekend, but so far it hasn't shown up. Very rarely do things disappear forever, so maybe it will show up again.
Posted by scraphappy at 8:40 PM

LOL----I think I have the same tablecloth as you! it looks like (from the see-through) that it's a creamy type one? I picked up one yesterday for $5.00 and hung it up already; it'll work for now until it finds a permanent wall. THANKS AGAIN for the tip!

The colors of the "playing around blocks" look fun; kinda fun to just putz and play and see what comes out of the brilliant design area of the mind, huh? ;0)

LOVE the facelift on the blog...three columns! NICE!

I should love to have a design wall, be it ever so humble, but I don't have a wall in my sewing room to hang anything, so I'll have to make do with the floor until I can work something out. I love the colours of both the flying geese and the squares, very fresh and cheerful.

What a fun design wall you have going there! So colourful and happy!

I love what is on your design wall...love the colors too.