We always root for the kids to do well in all their activities.  It is nice to see them rewarded when they do well.  Somehow every little victory leads to a bigger time commitment though, and we seemed to be a bit short on hours in the day lately. 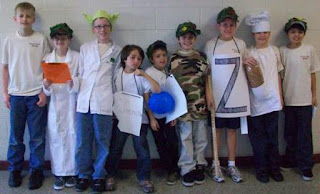 Last weekend Ryan's Lego Robotics team had a tournament and qualified to compete in the regional competition.  We had thought we would be done with that before football started again, I guess it won't work out that way.  The kids were all so excited though and want to get their robot to complete another challenge before the next round. 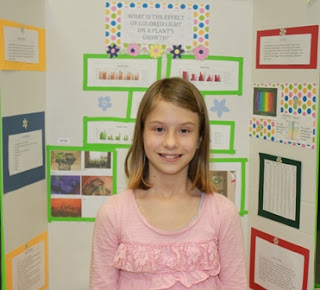 Yesterday was the school science fair competition. I had volunteered to be a judge. I couldn't do any of the categories that my kids were in, but ended up doing some of the other groups.  I didn't do the nosy mom thing and stayed away from the area where their projects were.  When I went back after school though to get Anna headed off to her Girl Scout field trip and Ryan working on his robot I found out that she had won in her category and qualified to compete at the regional competition.  We went to the awards ceremony for that last night though Kurt was late because it was at the same time as the football coaches meeting.
It is all good, maybe we just need to start doing some picking and choosing.  I'm feeling a little overbooked and stressed, I'm sure some of that is carrying over to them.  For now, it is Friday though.  A weekend is always good for the stress levels.
Posted by scraphappy at 6:57 PM

Congratulations to Ryan and Anna on their accomplishments. And congrats to you for making it to the weekend. :) Now send them to bed and go get some "me" time.

Congratulations on the great accomplishments! Take some time to relax this weekend.

congrats, I'm certain you are just as proud as they are of the accomplishments!! They do grow up fast and these times will be behind you before you know it. While there will be wonderful new accomplishments, there's always a little something that yearns for those pre-high school years!! My youngest will be graduating high school this year. Where does the time go?? Hope you all get some time to relax and enjoy the weekend!!

Congrats to Ryan and Anna! The lego league is great, my son competed in the FIRST robotics in HS... so much fun

Congratulations to both your winners! It is hard to juggle everything sometimes, but being busy with things like this will keep them out of trouble. You're a mom. You can do anything.

I am at the family stage where my teenagers don't want to have much to do with us and miss the days when we were crazy busy running around to their activities. Try to enjoy this frenetic time...it's over before you know it!

Lovely to see them doing well, and enjoying the process. Enjoy your weekend

Hello Twin....
I try to remember everything I was involved in when I was a kid and all the things I wanted to do that I was told "no" to. There is only so much time in the day, and I support the girls wanting to join in "things" but also educate them on the concept of priorities.

Absolutely though----congrats going out to Ryan and Anna! ((Are you really surprised at Anna's win, though??? )) nudge-nudge

Enjoy some down time this weekend! A weekend IS good for stress levels!! :0)

Congrats to both of them - and I know just what you mean - it's not that I'd have them drop Guides, Cubs, flute lesson, trampoline, netball, band, recorder, tennis or anything else I'm leaving off the list but some days I just wish there weren't quite so many places to be...

Congrats to the kids and good luck to you with the additional time you need to spend! It will all work out! :)