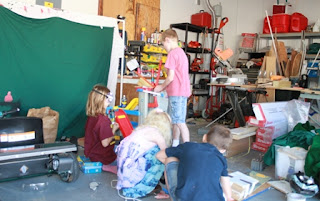 Saturday was pretty booked this week with the Lego thing and the usual ice skating and trying to finish the sunshine quilt, so I tried to carve out some time on Sunday.  DH was kind enough to schedule an OM practice even though he is out of town, so that took up the middle portion of the day.  I took my iron out to the garage and pressed some strip sets while the kids worked on their machine. I also did some cleaning in the garage, though it doesn't quite look like it from the photo.  The other side is much nicer, you'll just have to take my word for it.

After that the kids came with me to take the quilt to the hospital and deliver it to Meg.  She enjoyed all the signatures on the back and spent a lot of time reading through them all.   She said that she had never had a quilt before and was quite overwhelmed by having one to keep and enjoy forever.  Sydney was nice enough to explain to her that we have lots of quilts all over our house and even a giant one on the wall.  Kids are always good for lightening the mood.
The kids wanted to stop at a special toy store on the way home to buy some hex bugs with money that they had gotten for Christmas.  By then it was almost dinner time, so we dropped by CiCi's pizza along the way.  I worked on the ironing again after that and made a startling discovery.  Despite a solid month of sewing steadily at blue scraps and producing several projects in various stages of completion, I seem to have more blue scraps now than I did at the beginning of the month.  That isn't really possible, is it?  I'll finish off what I can tomorrow and tidy up all the loose ends before getting an after photo.  How hilarious would it be to find that my scraps really do multiply in the dark of night?
Posted by scraphappy at 9:38 PM

How can it be possible that you still have blue scraps after all that you have made this month...I don't get it! For sure something magical is happening and I wish the same thing would happen in my bank account LOL!

That quilt with all the names on it was wonderful. I enjoyed watching it come to life. I have not done anything with any of my blue scraps this month. I have not been well. I am looking forward to a new month and a new color. Thank you for having this fun challenge.

I also have more blue scraps than before, so I know the feeling! Also, the blog background change makes me think red might be February's color... hm...

How wonderful that you gave Meg her first quilt! So glad she liked it. I ended up with more blue scraps as well. The blue scrap fairy must have visited us both. All the better to finish up my projects though. :D

It must be a blue scrap epidemic!
Cheers,
Dionne

It was like that here at some stages through the month. Now, I have very little of the old scraps left, but have some new blue fabric.

suzan almond said...
This comment has been removed by the author.
Monday, January 31, 2011

The author of the above comment has come bavk to try again.
I did not make myself clear at the beginning.
I am a returning patchworker, but I have only just ventured into the world of quilting. A steep learning curve for an old'un !
If it's not too late I'd love to join in the 'Rainbow Challenge' as colour is my 'thing'.
Thanks for a great idea !
Regards, Suzan.

My blue scraps did reduce. When I started I had a bag of blue fabrics and I stuck to only using those. I never touched my stash but the flipside is that I could not do quilts that required large pieces or even standard sizes.
So it all goes back to what is a scrap and what is a stash fabric.??

Pressing in the garage. Obviously you live somewhere warmer than I do. You make every minute count. What a great example! We have been busy with the grandsons visit so new sewing and limited computer access. They have gone home so we hope to return to "normal". I too am guessing red with the new background colour. I am certainly enjoying this challenge. Joanne H

Scraps do multiply!! I keep finding them all over! I'm hoping that I can get to doing some work with scraps very soon. I may have bitten off more than I can chew again. *sigh*

The few blue scraps I had are pretty much gone however the new ones from the new material reproduced quickly. I posted my blue on my blog this morning. Can't wait to see what the color is for Feb. Hugs